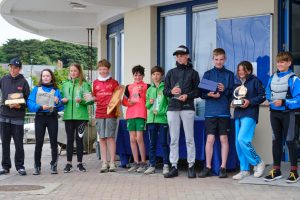 By Communications on July 10, 2021 in Latest, Optimist

RCYC was represented by thirteen sailors: 6 in senior fleet and 7 in junior.  The sailors were enthusiastic to get racing but with the dearth of events over the last two years, as well as this being the first main fleet event for some – steely nerves were few and far between.

Six races were planned over the two days in a race area approximately two miles North and West of Howth Harbour.

Day 1 started out cloudy with intermittent rain and medium airs from the South-East of 10-15 knots. The PRO was optimistic of 4 races on the first day but through the third race visibility became so poor that the course had to be shortened and the fleet escorted ashore.

Day 2 had a brighter start with just a little fog covering the brow of Howth Head.  Visibility on the water was good with a steady south easterly of 12-13 knots.  As the afternoon progressed however the breeze picked up through races 5 and 6 bringing gusts of up to 20 knots and posing a challenge to some sailors.

In the Seniors RCYC’s JP Curtin led much of the event with a bullet and two 2nds on day 1.  In the final scoring he was tied for points with Caoilinn Geraghty-McDonnell of the RStGYC but Caoilinn won on countback placing her 1st and JP 2nd overall. Joseph O’Leary and Isha Duggan placed 8th and 10th with Joseph the first Silver sailor and Isha the 3rd Silver, Ethel Bateman finished in 18th, Fionn Hayes 26th and Caoimhe Corkery 28th.

In junior fleet RCYC populated the podium with Olin Bateman in 1st, Lucy Moynan in 2nd and first Junior girl, and Andrew O’Neill in 3rd, followed closely by Matt Mapplebeck in 6th and Daniel Copithorne in 7th.  Two of our younger competitors sailing their first main fleet and away event were Dougie Venner in 13th and Rian O’Neill in 26th.

Well done to each of our sailors for representing themselves and their club with excellent sailing, enthusiasm, sportsmanship, and good humour throughout. We are all immensely proud of you.

Thank you to IODAI for their work in co-ordinating the event, and the organisers at HYC for planning and hosting the Championship. Thank you also to the RCYC parents who volunteered their tireless work on and off the water to support the event, and to coaches James McCann and Frances Corkery for encouraging, guiding and supporting the sailors.

Due to number restrictions because of Covid this was a main fleet only event. Good luck to those due to compete in the Regatta Fleet Leinsters at Malahide Yacht Club this weekend.