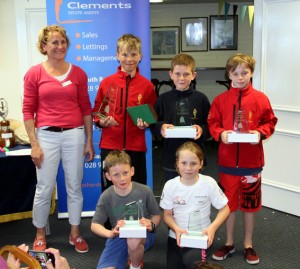 Last weekend saw a large Royal Cork convoy head north to Ballyholme Yacht Club to compete in the second Regional event of the year – the Ulster Championships.  One hundred sailors competed with 25 from the Club (22 in Main Fleet and 3 in Regatta).

On Saturday morning after an hour’s postponement the Race Officer, Robin Gray abandoned racing for the day which left all sailors and parents spend the afternoon exploring Belfast.  The Titanic Experience and W5 were the museums of choice.

Sunday morning saw the wind ease to 8 – 12 knots and permitted racing to commence.  After the second race the wind died to 0.4 knots!  It was in stark contrast to the gusts on Saturday morning that would literally knock you over!.  Thankfully the wind filled after 40 minutes or so and the Race Officer got Race 3 underway and completed a series. 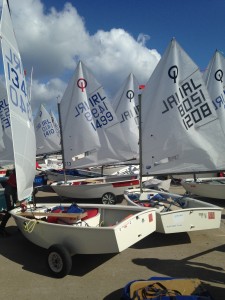 The Senior Fleet saw local sailor Harry Bell score two bullets and a second to win the Senior Title.  We had two sailors in the fleet – Cathal O’Regan and Sophie Crosbie who scored a 13th and 17th respectively.

In Regatta Fleet, Anna Keal won the 6 race series in impressive style which included two bullets (her discard was a 3rd!).  Simon Pritchard was 4th and Alana Twomey 11th.

Well done to all our sailors.

The Connachts are on 11/12 July in Lough Ree Yacht Club and entry is now open through www.iodai.com