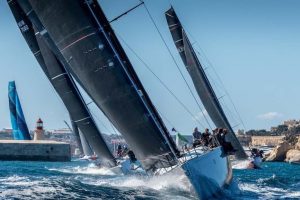 By Communications on October 22, 2020 in Latest

The Royal Cork’s Nicholas O’Leary has been victorious in Class 1 of the Rolex Middle Sea Race. Sailing aboard ‘Aragon’, a Dutch R-P/Marteen 72, O’Leary and fellow crew were 8th overall and first on IRC in Class 1.

Commenting after the race, Nin said it was particularly light and shifty for a large part of the race but it was nice to be welcomed back to the dock by Cork Week veteran Louay Habib. Nin also noted that Northern Irish sailor Michael ‘Chunky’ Ferguson won their class also on a Mod 70, ‘Mana’.

More details on the race here