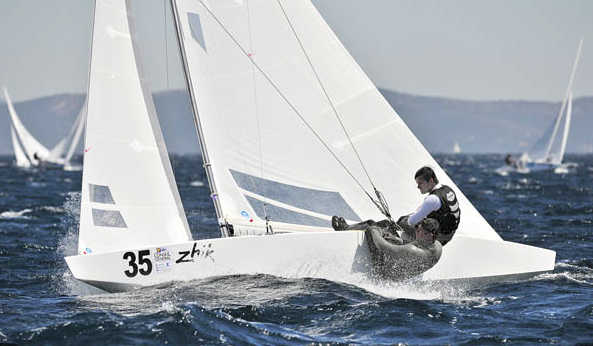 After three races at the Star Class World Championship at Hyeres today the top three cards of the pack have been shuffled.  Britain’s Iain Percy took first place today and now leads the regatta.  Robert Scheidt of Brazil finished sixth and now lies second overall with Peter O’Leary and David Burrows taking twelfth position.  This leaves the Irish pairing in third place overall with three races to go and a discard to apply so no doubt we will see more shuffling in this highly competitive fleet before the end of the competition.

In the 72 boat fleet at Hyeres, consistency has paid off at this early stage for O’Leary and Burrows with a 3rd and 4th leaving them leaders ahead of Scheidt and Prada of Brazil in second place, followed by Iain Percy and Andrew Simpson of Britain with fourth place filled by Flavio de Marazzi and Enrico de Maria of  Switzerland.   Exalted company indeed to be in leading a fleet that  includes a host of other top world names in this most difficult fleet of all to compete in.

O’Leary and Burrows can rest content in the knowledge they have already qualified their place for Ireland at Weymouth but the final four places in the Star Class remain to be filled at this last qualifying event.