By office on December 14, 2017 in Uncategorized

Keelboat Report
Santa Clause was out sailing for the final day of the O’Leary Insurances Winter League on Sunday 10th December. He travelled All the way from Schull HSC and was crewing aboard Shelly D with Michael Murphy. His elves had also been given the day off to go sailing and their red and white bobble hats were much in evidence in the fleet. 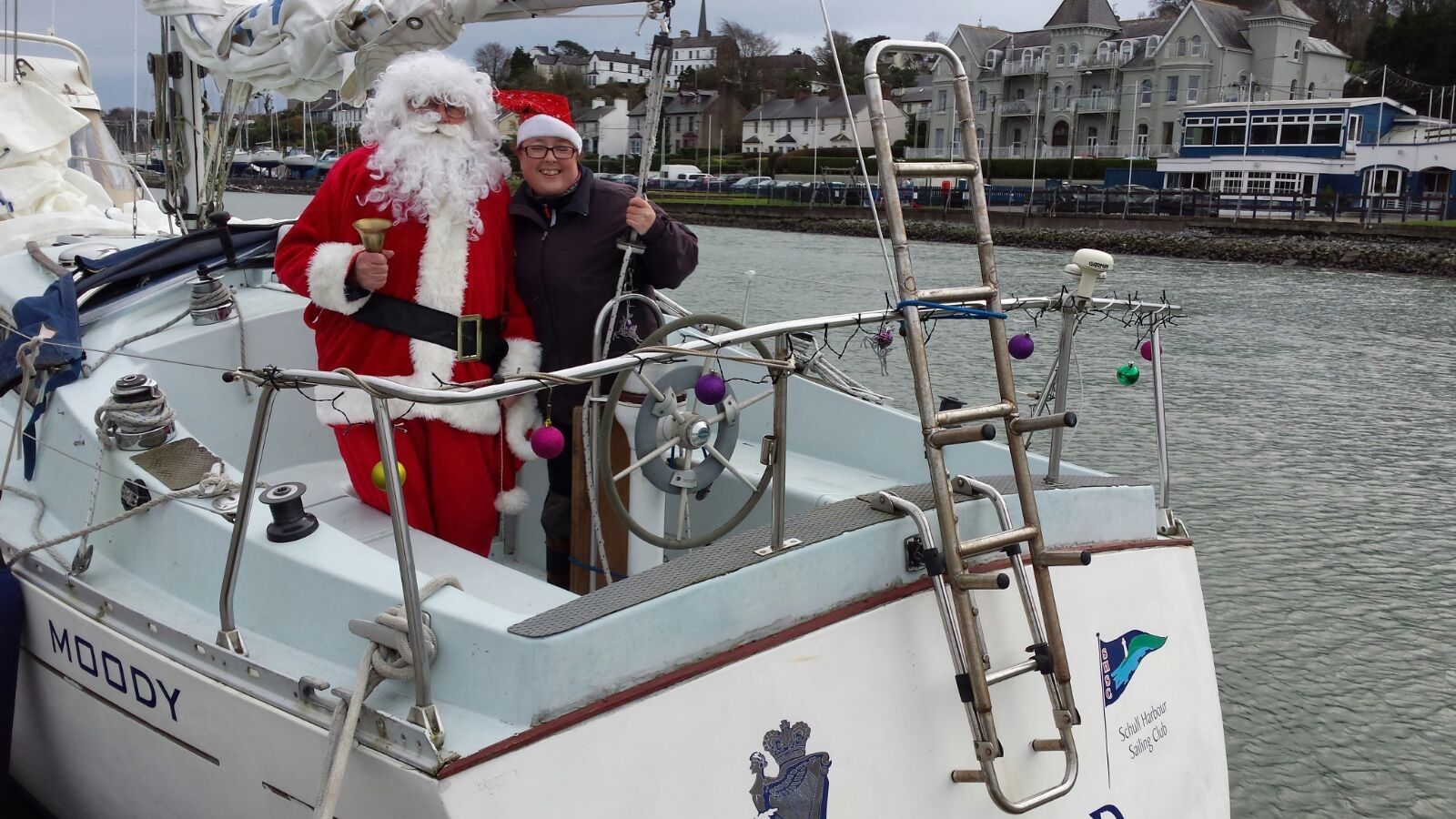 It was just as well that Santa was wearing his red merino wool waterproof suit. Bracing might be a good word to describe the weather. It was overcast, but with the sun breaking through occasionally and the odd drop of rain in a very cool, squally wind of 15 to 20 knots. The wind was in the west south west for most of the race, but it veered to slightly north of west before the race finished. It was a neap tide and the ebb was augmented by the ‘fresh’ in the River after Saturday night’s very heavy rain.
Going into Sunday’s race Coracle IV (Kieran Collins) and No Excuse (Ted Crosby) were level on points, leading the series, and T-Bone (Tom Durkan/Clive O’Shea) was lying third, but the day’s results could change all of that. It was all to play for.
With Santa watching, and checking his list, everyone was on their best behaviour at the start at Corkbeg and the fleet got away cleanly on the first attempt, making life easier for Race Officers Clem and Wendy McElligott. T-Bone got a good start and got to No 8 first, closely followed by Nieulargo (Denis Murphy), Coracle IV, Dark Side (Robin O’Mahony) and Heroes and Villains (Gary Rhodes). Jelly Baby (Brian Jones) and No Excuse were next. The fleet was starting to spread out on the run to No 9 and the leg to No 20. In spite of the strong ebb, most boats got to No 20 without a tack by sailing across the Spit Bank and ballast stones. This had skippers watching their echo sounders and thinking ‘if there is enough water for Nieulargo, there is enough for us’.
Nieulargo rounded first and set a spinnaker. T-Bone (Tom Durkan/Clive O’Shea) followed her around and then had some sort of spinnaker misshap because, the next time we looked, they were heading back towards No 20. Coracle IV and Dark Side took the opportunity to overtake. T-Bone had ground to make up on the fetch to Corkbeg and beat Cage. The wind had shifted a little north of west as the leaders were broad reaching out to No 3. It was Coracle IV’s turn to experience a problem – a slow spinnaker drop and head sail set, which gave the chasing boats a chance to close the gap.
There was a short beat back to Cage. Nieulargo finished first. T-Bone was second with Coracle IV only six seconds behind. Only seconds separated the next group of boats also – Dark Side, Alpaca, Heroes and Villians and Jelly Baby. Crucially, No Excuse finished only 3 minutes and 20 seconds behind Coracle IV.
As we warmed up in the bar after the race, eating the mince pies which Anne Lordan was handing round, and sipping hot drinks, we checked the results web page but it had not been updated. Kieran O’Connell kept up the suspense until the prize-giving.
The beautiful turned wood, Irish Mist trophy, presented in memory of Archie O’Leary for first place in the All-In series on IRC handicap, had been won by No Excuse. They really had a superb series with a win and four second places. Coracle IV was a close second and T-Bone were third. Coracle IV was first in All-In ECHO handicap, with No Excuse second and Sea Dragon third.
Written By Ria Lyden Class 1 Captain.