By Bob Bateman on September 13, 2013 in Uncategorized 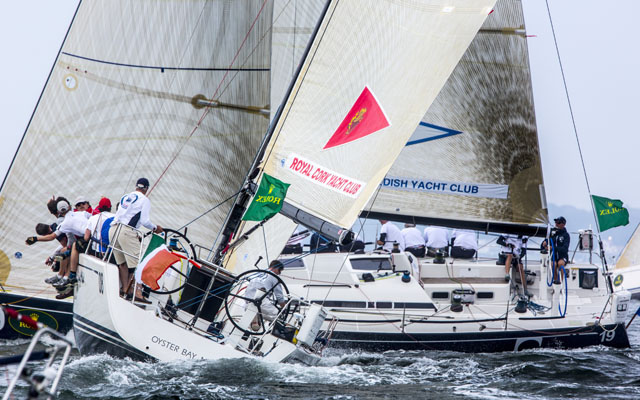 The 20 yacht club teams competing in the New York Yacht Club Invitational Cup presented by Rolex are becoming very familiar with racing in the East Passage of Narragansett Bay as they returned to that area for two races on the third day of the competition.

Marking the midpoint of the regatta, today’s racing was notable for tight mark roundings with numerous boats overlapped, heavy activity on the part of the umpires, and the defending champions from Royal Canadian Yacht Club extending their winning streak from two races to four.

“I was off my game in the beginning of the regatta,” said skipper Terry McLaughlin. “We’re now sailing how we can sail. You don’t have to win the start really, but if we get off the line and get the first shift then we have a chance of being up there. The goal is to finish in the top-five every race. We have pretty good speed, especially in the breeze, and we have good crew work.”

The Royal Canadian team has competed in all three editions of the Invitational Cup, and McLaughlin observed that the competition is getting tougher, the teams are more prepared and people are learning how to sail the Swan 42s. McLaughlin also said the RCYC team likes hiking breeze and that they will be working to get off the line well and not make stupid mistakes. “We spent the first two days doing circles,” added McLaughlin. “This is probably one of the few fleet races utilizing on-the-water umpiring [to address rules questions]. The social side of this regatta is very big; you don’t want to spend all night in the protest room.”

Today’s drama began right from the start of the day’s first race when five boats were over early. Royal Canadian and Great Britain’s Royal Thames Yacht Club traded the lead of the race back and forth, with the Canadian’s prevailing to cross the finish first; Seattle Yacht Club was third across the line. Australia’s Royal Prince Alfred Yacht Club was overlapped with Larchmont Yacht Club as they bore down on the finish leading Larchmont to call for Royal Alfred to sail their proper course. The umpires then flagged the Aussies, who did not do their penalty turn, and they were subsequently disqualified from the race. It would appear that nothing short of a miracle is needed now to put Royal Alfred back in podium contention.

There was a clean start to race two of the day, and the teams that chose to sail close to the shore of Aquidneck Island gained the most ground. At the first mark rounding, Seattle Yacht Club was in the lead, followed by Royal Hong Kong, the Cruising Yacht Club of Australia and Royal Canadian. By the third mark, the Canadian’s were less than a boat length behind Seattle, followed by Hong Kong and Royal Thames Yacht Club. Four additional teams were overlapped as they rounded and then there was a sizable gap to the remainder of the fleet. In a photo finish, Canada edged out Seattle to take their second win of the day which also moved them up one spot, to second, in the overall standings with 34 points.

“We shook off the gremlins,” said Andrew Loe, skipper for the Seattle team, on the dock after racing. “We’ve been fast and we’ve been smart since the beginning of the regatta. We just had some unfortunate things happen.” Loe was referring to losing the kite in the first race of the series, for which they were later granted redress, as well as being over early at the start of another race. “We weren’t worried after the first two days. This is a long regatta; we still have almost half the event to go. We’re happy, we’re sailing fast and now we’re getting rewarded for it.” 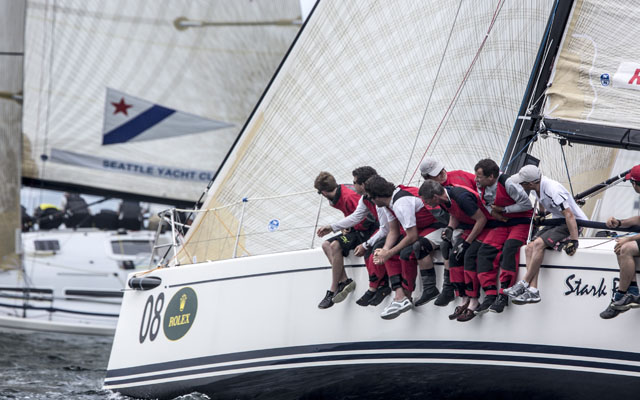 Racing resumes today,September 13, with the first race of the day scheduled for 1100 EDT. The course location, on Narragansett Bay or Rhode Island Sound, will be determined by the Race Committee based on the day’s conditions. The five-day regatta wraps up on Saturday, September 14, 2013, when the champions will be determined at the conclusion of racing.