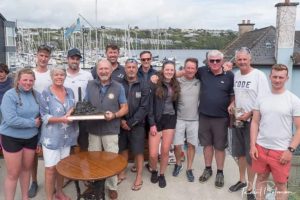 By Communications on August 6, 2020 in Keelboats, Latest

Denis Murphy and Annamarie Fegan sailing Nieulargo were the winners of the IRC All In Fleet in Kinsale Yacht Club‘s Fastnet SCORA Race sponsored by UK Sailmakers Ireland.

The Grand Soleil 40 crew that included former All Ireland Sailing champion Nin O’Leary and 2004 Olympian Killian Collins were winners of KYC’s will Fastnet Trophy awarded to the yacht with the lowest corrected time on IRC rating.

Second overall was the race organiser Finbarr O Regan of the host club for his performance in the Elan 333, Artful Dodger.

Third was another Elan 333 Stephen Lysaght Reavra Too also of the host club.

Winds were westerly and averaged 10-knots.

Prizes were presented in IRC and ECHO. Full results are here

KYC adds: Glorious conditions greeted the nine Cork & Dublin boats that came to the start line for the McWilliam Sailmakers sponsored annual Kinsale-Fastnet race. While the present Covid conditions may have affected the numbers those that turned out were well campaigned ensuring a very competitive event. The race was a fantastic tactical challenge working the tides in and out of the bays with a beat to the rock & run home. The sail to the rock was a fantastic offshore experience with a full moon, shoals of dolphins and even a meteorite shower to entertain the crews.

Meridian rounded the rock in first place with Nieulargo hot on her heels but the AIS positions & quick calculations showed Artful Dodger & Cinnamon Girl were proving difficult to shake off. The run home was nearly direct downwind bar the reach from the Old Head to the finish which didn’t suit the new Sunfast 3330 but both Niulagro & Artful Dodger relished those conditions. While Meridian took line honours and Nuilargo came home second it was impossible to know who was going to win the IRC Fastnet Trophy with all boats bringing home fresh breeze.