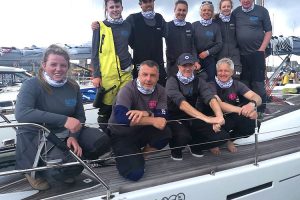 On behalf of the Flag Officers and Members of our great club, I would like to congratulate the Murphy Family and their crew on-board Nieulargo who were victorious in this year’s Dun Laoghaire to Dingle race.
The race was hotly contested with 38 boats taking to the start line in Dun Laoghaire on Wednesday but Nieulargo lead from start to finish in what really was an upwind battle, spinnakers only deployed for the final approaches from the Skelligs to Dingle.

The race was not without drama as the final result was delayed due to Kinsale Yacht Club’s Freya seeking redress for their gallant rescue of a kitesurfer off the Wicklow coast. With Freya granted a 75 minute redress, Nieulargo was still over 30 minutes ahead on corrected time which meant the crew were officially confirmed as winners at midday on Saturday.

Nieulargo and her crew will arrive home to the Royal Cork at 20:15hrs tonight (Monday 14th June 2021) where I have requested a five gun salute to be given from the club lawn and members are encouraged to come to the club to join the short event. I would also like to congratulate our three other competing club boats Alpaca, Blue Oyster and Cavatina and their crews.

Please join us in congratulating the crew,