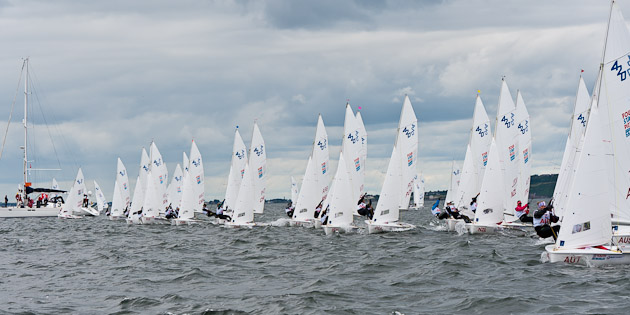 Mother Nature was not content merely to throw more testing westerly offshore winds at the 343 Olympians of the future racing in the Four Star Pizza ISAF Youth Sailing World Championships. For today’s two races, held on this third day of the competition the under 19-year-old sailors, some of whom who have travelled from 61 nations as far flung as Belarus, Macedonia, Peru and Korea, faced the additional challenges of torrential rain and, at times, reduced visibility.

Ireland’s 420 Boys’ representatives, 15 year old Patrick Crosbie and 14 year old  Grattan Roberts from Cork, also had a tough day scoring a 16th and a 23rd – the latter their worst result has now been discarded and they are lying 17th. “It wasn’t the best,” admitted Patrick of how today unfolded. “I think it was just our tactics and where we went on the first beat. It was a disaster. It wasn’t great at all.” Crosbie added that they had struggled to keep the boat up to speed and powered up in the very variable conditions and at times Grattan would be trapezing hard and at other times would be standing inside the boat during a lull.

The 420 dinghy was designed by Christian Maury in France and the class developed rapidly as a step up boat for the 470 Olympic class dinghy and was also adopted by the RYA as their step up boat in the seventies. As a former member of the Irish Olympic Committee when it was the Irish Yachting Association, I well remember the constant efforts to obtain agreement on a step up boat for the young sailors and the recommendation was that it should be the 420.  However, to this day there is still the same complete fragmentation on this subject.  This in effect means we have Fevas, Laser Radials and now there is a move on RS200s.  What I am saying here is that it is a wonderful achievement for these two young lads to have won the place to represent Ireland in the 420 class and to score a second in a fleet of this calibre shows their enormous potential.

Tomorrow(Tues) will be a lay day at Dun Laoghaire and by Wednesday the weather may have abated somewhat to give all the young competitors the opportunity to sail to their full potential in more pleasant conditions.

The organisers have put in enormous work to make this event the success it is and they are to be congratulated for their efforts.  Incidentally, I have to add here that Dun Laoghaire was looking absolutely splendid yesterday (sun) when I was there and with the sun shining for most of the morning the whole place sparkled.

Sailing ‘Stars’ Out To Upset Brazilian And British Party
Home is the sailor, home from the sea.