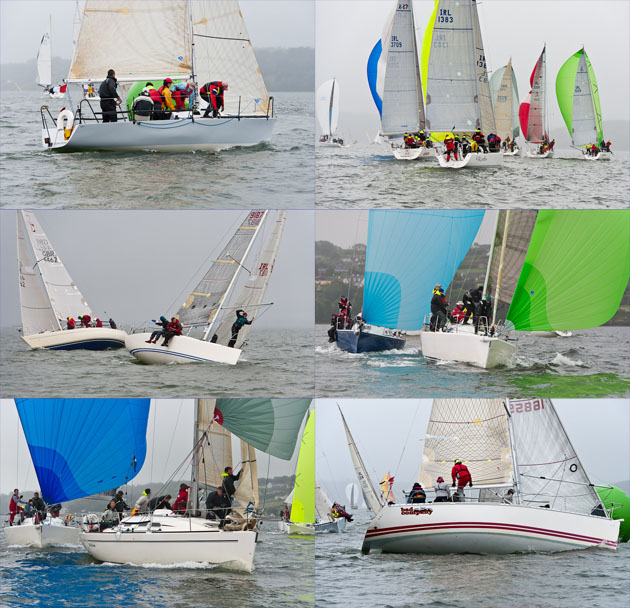 It seems like only yesterday that we were all enjoying the Cork Week All Aboard weekend and looking forward with eager anticipation to the full five days of competition ahead.  Well, the competition period enters its final day tomorrow and what a week it has been.  Yes, some newspaper pundits were harping on numbers being down, which they are in many countries worldwide, yes some referred to the event as a ‘boutique’ regatta, and they might as well not have bothered because Cork Week 2012 was still three times bigger than the first ever Cork Week in 1978, and yes, your photographer and scribe were on the start line for that event competing in their own boat, Red Robin, and still feel very proud to have finished in fourth place in their class. When reminiscing early in the week with former Admiral Bill Walsh he remembered  the early days when Former Admiral Archie O’Leary, father of Anthony, another former Admiral , mooted the idea of a Cork Week and another nameless former Admiral said that “it would never work”. How wrong this was and here we are 18 Cork Weeks later still going strong, very proud of it and looking forward to celebrating the 300th anniversary of the Royal Cork Yacht Club in 2020 that is expected to be another Cork Week Year.

During the week all sorts of sailing conditions were thrown at the organisers by the weather gods such as light flukey conditions, sun and 10 to 12 knots of breeze on Wednesday, and as for today, the big boys and their offspring the 1720s, were treated to seas outside the harbour that came from all directions, 20 knots of breeze at the start of racing and finishing with about 4 knots at the end.  After the first race racing for this fleet was abandoned for the day.  Conversely though, the lower rated fleets managed to get in three races by sailing  inside the harbour on the eastern bank and even though there was rain and low cloud it didn’t dampen the enthusiasm of the competitors and so, on to tomorrow.

For the final day tomorrow the Director of racing, Anthony O’Leary, has come up with a new idea to mark the last day of the regatta and it should be noted that the tide will be playing ball with this idea.  I quote him as follows: “For the last day of racing, we intend to have the whole fleet in Cork Harbour, which should be a fantastic spectacle.” The Race Committee has also decided to award a long standing and very prestigious trophy at this year’s event. The Carroll Cup dates back to 1858 and this year will be the prize for a Harbour Race Time Trial. The Moonduster Mark – Cobh Mark –No.18 buoy section is a distance of 1.8nm and it is our intention to time each boat in the Harbour Race over this distance and apply their IRC handicap, to find the winner of the Carroll Cup 2012. The particular part of the course passes an area known as The Holy Ground and is featured in song and verse and is very much part of the folklore of Cork Harbour.”

This should provide a spectacular finale to what has been an outstanding week.

Today was the kind of day that makes Cork Week special!
The Grand Finale