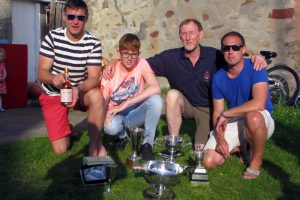 The National 18 Class gathered this year at the Royal Findhorn Yacht Club for the weeklong championship and competed in challenging, but light sailing conditions over 10 races.

The racing was split over two fleets, with thirteen ‘Ultras’ and five ‘Ultimates’ on the water.

It is always great to see the wide range of ages on the water going from the teens to the truly young at heart.

Both fleets had very tight and competitive racing, and this was especially true of the Ultra fleet with several boats in the running on the final day, for the overall Class Championship Trophy.  A convincing two bullets from team Shark 11, secured the overall championship for Charles Dwyer, John Coakley and Harry Pritchard.

The Cock of the North, was also closely contested during the first five races of the series and team Aquadisiac secured the trophy for Colin Chapman, Morgan O’Sullivan and Eric Lyons.

Tom Crosbie and family sailed the series and secured fourth in the overall classification and the Family Trophy.

Of the first five boats in the Ultra fleet, four of the boats are from Royal Cork and we now look forward to a thrilling Class Championship in Cork Harbour in the first week of August 2020. 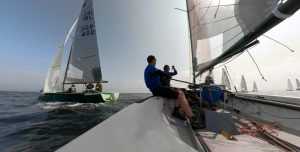 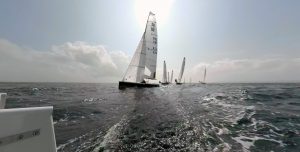