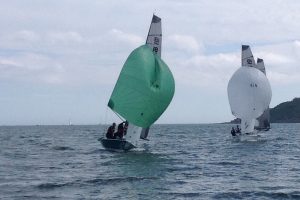 By Annamarie Fegan on July 24, 2016 in Latest, National18, Uncategorized

The National 18 class were out in force yesterday afternoon for a final tune up before travelling to Finthorn in Scotland to compete for the ‘Cock of the North’ title amongst other trophies.

A total of nine of the slick new boats will travel from the Royal Cork which is the largest number to do so for many years . The majority of the travelling party will head to larne in Northern Ireland early next Friday in order to catch a ferry across to Scotland.

Competition will be intense and let’s hope that the number trophies being competed for will be retained by our Royal Cork sailors. Good luck to everyone travelling and competing.