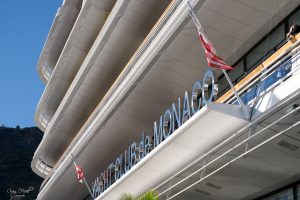 The team arrived at their Monaco hotel after an evening flight from Dublin airport on the Sunday 9th Feb. The hotel was a quick 10 minute’s walk from the Yacht Club. To the delight of the team fabulous sports cars were parked outside the magnificent hotels on route to the club, ready for their phone cameras to snap at every opportunity!

The first 3 days were devoted to team racing coaching and rule explanations, organised & provided by the YCM which the 4 sailors availed of & enjoyed. Day 1 had superb wind which made for lively sessions on the water within the harbour itself throughout the day. Sadly that strong wind wasn’t to last. Day 2 of the training was spent both in the classroom (Event centre) and on the water outside of the harbour seeking out some wind & Day 3 saw the end of the clinic & registering for the event. This was to be the pattern throughout the event, waiting on the land honing their ‘baby foos’ & card playing skills before heading out to sea to avail of the ever elusive wind.

The opening ceremony was held on the Wednesday evening, giving each team an opportunity to display their countries flag and parade onto the main stage for many photographs. The finale was a spectacular show of all the teams climbing onto the stage trying to out wave & shout their team names the loudest, a great site to see & behold!

The racing was always very technical, but even more so in the lighter winds, always exciting. There was much shouting & manoeuvrings throughout each race trying to block & advance the opposing teams in order to get the elusive win. Unfortunately that elusive RCYC win was like the wind, it failed to arrive for the most part. So many close calls which the results didn’t really reveal. Our team of 4 put up many valiant efforts which were sadly thwarted by some lighter & smaller incredibly experienced sailors at times who managed to outrun them in the frustratingly light conditions. Our sailors didn’t give up, they completed every race and showed their resiliency & determination by always putting in some great moves time & again.

Off the racecourse they continued to make new friends & meet up with existing friends from the various countries who they knew from previous competitions, In short they had a fabulous time! Each evening they sampled delicious dishes at various restaurants around Monte Carlo, enjoying the culinary delights the chefs had to offer, some amazing pizza’s & chicken wings where eaten in fabulous surroundings! Sports-car hunting was always on the agenda, with much phone credit being spent on sending these pics to their friends back home!

The overall winners of the event was Team Croatia, JKU Deep Blue, who held their nerve to win the US National Team in the finals, with 3rd place going to Club Nautic Cambrils of Spain.

The YCM provided a thoroughly well run & managed event,  making all the teams & competitors welcome. Great facilities & equipment were provided  which was really appreciated by all . Many thanks once again Yacht Club de Monaco & all the organisers who made it such a superb event!

Here’s a link to a small Google album of a selection of pics from the event: here