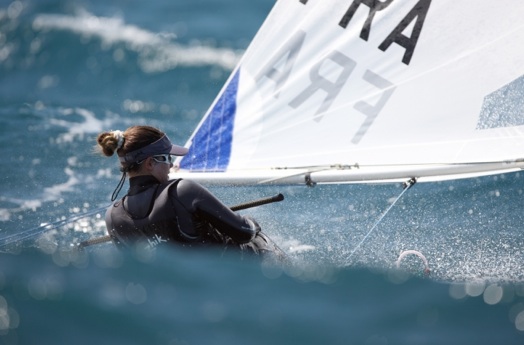 As over 800 sailors across ten Olympic and two Paralympic events enjoyed 17-20 knots of breeze in Hyères today it proved too late for Ireland’s Annalise Murphy who suffered a shock drop to the Silver Fleet after the first qualifying series of the event.  She won her first two races in the Silver Fleet to day and finished 35th overall in the 55 boat laser radial fleet.  The mistral  arrived on the third day of racing in the South of France as the final series got underway, pitting the top sailors against one another. After two days of tricky breeze, a condition that seems to have a habit of pulling Murphy down, a fresh 17-20 knot easterly breeze was welcomed by the sailors as racing ramped up.

Undefeated Australian Men’s 470 duo Mat Belcher and Will Ryan won both of their races in the gold fleet and world No. 11 Women’s 470 pair Fernanda Oliveira and Ana Barbachan (BRA) opened up an eight point advantage.

Making the most of the conditions in the Nacra 17 was Sweden’s Tim Shuwalow and Hanna Klinga who moved into pole position whilst France’s Audrey Ogereau and Matthieu Vandame were in fine form taking two bullets to progress up the leader board. Carrying forward a non discardable fifth place from the qualification series the Swedes notched up a third, second and an eighth, discarding the latter, to open up a three point advantage over Switzerland’s Matias Buhler and Nathalie Brugger (SUI). Shuwalow and Klinga teamed up three months ago and at ISAF Sailing World Cup Palma they finished sixth and Shuwalow is under no illusions that they are the finished product at such an early stage, “We’re still developing and learning a lot each day and have a long way to go yet but it’s proving good so far,”said Shuwalow.”We try and keep it fun because obviously there are stressful moments and that’s the way it always will be but she’s new to the catamarans and enjoying it and I just really love the Nacra 17. Two days of final series racing and two Medal Races follow and the Swedes believe a podium could be in sight,”If we continue sailing consistently and up there then we’re in with a chance but there are many good teams and some of them are probably yet to find form this week and it will get tougher as we get towards the end no doubt.”

The Swiss pair of Buhler and Brugger won the first race of the day and posted an impressive third and ninth to sit second whilst rounding off the top three is Billy Besson and Marie Riou (FRA).

Despite an OCS in the second race of the day Dylan Fletcher and Alain Sign (GBR) have taken the lead in the 49er. Carrying a third place forward they recorded a sixth and a fourth but will have to tread carefully for the remainder of the final series following an OCS. Making the biggest climb up the leader board is Spain’s Carlos and Anton Paz. The Spanish brothers flew out the traps taking a bullet and a second in the gold fleet before a 13th in the last race of the day. The result moves them from 14th to fifth. “For us our first two races were really good with a first and a second,” said Carlos. “The last one was completely opposite after a change in the wind but overall we’re happy with our day. Our 13th isn’t a bad result for a discard so we will try to push and be in the final eight. ISAF Sailing World Cup Palma gold medallists Erik Heil and Thomas Ploessel (GER) are just one point behind Fletcher and Sign whilst France’s Julien D’ortoli and Noe Delpech sit third.

In the 49erFX Charlotte Dobson and Mary Rook (GBR) are coming together nicely after racing with different team-mates at ISAF Sailing World Cup Palma. Dobson finished fifth with Sophie Ainsworth whilst Rook came 22nd with Kate Macgregor. Two race wins in Hyères has moved them into top spot ahead of World #2 Alex Maloney and Molly Meech (NZL), who took the days other race win, and World #1 Martine Grael and Kahena Kunze (BRA). With limited skiff racing experience the British team are mixing the 49erFX racers up at the early stages of the quadrennial to find the right formula and Dobson is seeing the progression first hand,”The learning curve is literally vertical, every day is a learning day and that’s what’s making it really rewarding at the moment.  You can really see the steps you’re making forward every single day.”

Ivan Pastor (ESP) held onto his lead in the Men’s RS:X but French youngster Louis Giard was the stand out performer on the race track winning the first of the day and coming second in the other. Carrying forward a fourth Giard, who finished third at the 2011 ISAF Youth Worlds, moves up to second overall and was a cheerful sailor after racing,”I was behind the Polish sailor but he was OCS so that was the win for me. This is my first win here and I’m really happy.”

Tonci Stipanovic (CRO) leads Brazil’s Bruno Fontes and Robert Scheidt in the Laser after a race win and a discarded BFD. Australia’s Matt Wearn took the day’s other bullet but carrying forward a 44th he only moves up to 25th overall.

Holding her Laser Radial advantage on the first day of the final series is Tuula Tenkanen (FIN). A third and a sixth enabled her to maintain her two point advantage over the chasing pack. Taking the day’s race wins was Canada’s Isabella Bertold, who lays fifth overall, and Great Britain’s Alison Young, sitting pretty in fourth.

Mat Belcher and Will Ryan (AUS) were back on top form in the Men’s 470 taking double bullets to jump up two places to second. Luke Patience and Joe Glanfield (GBR) hold the lead by two points but discard a 24th.

Fernanda Oliveira and Ana Barbachan (BRA) remain firmly at the top of the Women’s 470 leader board and have an eight point advantage over Anne Haeger and Briana Provancha (USA).

Pieter-Jan Postma (NED) has taken first overall in the Finn class and is one point ahead of Giles Scott (GBR) and Vasilij Zbogar (SLO).

In the 2.4mR Heiko Kroger (GER) opened up a seven point lead over Megan Pascoe (GBR) and in the Sonar Aleksander Wang-Hansen, Marie Solberg and Per Eugen Kristiansen (NOR) and Bruno Jourdren, Eric Flageul and Nicolas Vimont-Vicary (FRA) share the lead.

Durcan in pole position
Was today the start of summer sailing at last?