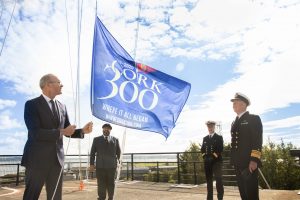 By Communications on September 1, 2020 in Latest

Minister of Foreign Affairs and of Defence Simon Coveney TD marked the Royal Cork Yacht Club’s 300th birthday at a small ceremony on Haulbowline island this weekend (Saturday 29 Aug), the Irish Naval Headquarters and home of the original ‘Water Club of the harbour of Cork’, as it was known back in 1720.

He was joined by the Chief of Staff of the Irish Defence Forces, Vice Admiral Mark Mellett, Flag Officer Commanding Naval Service Commodore Michael Malone, and the Admiral of the Royal Cork Yacht Club Colin Morehead.

The Minister also visited a new Royal Cork Yacht Club Exhibition, supported by AIB, at the Sirius Arts Centre in Cobh, another former home of the sailing club from 1854 to 1966.  The exhibition, which will run until December, looks back on the history of the club over 300 years, and what life was like during its time in Cobh. 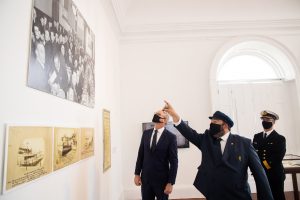 The Royal Cork, which is the oldest sailing club in the world, had to rescheduled most of its Cork300 events series planned to celebrate its 300th birthday until July 2021, as a result of Covid-19.

The hope is to truly mark the significant occasion next summer with a Tricentenary Maritime Parade in Cobh, a Tricentenary at Home Weekend Regatta, a Powerboat Festival, an exciting world-record attempt, A Family Race to the City, a Cork300 Gala Dinner in Cork City Hall, a Wild Atlantic Way Cruise in Company along the Cork and Kerry coastline, and more events yet to be announced.

The celebrations will coincide with the Irish Navy’s 75th anniversary and the final year of Seafest in Cork, making it a significant year for maritime celebrations in the county.

Commenting at the ceremony at Haulbowline, Minister Simon Coveney said, “It is a real pleasure to mark the 300th birthday of the Royal Cork Yacht Club.  This is the oldest sailing club in the world and it all began here on Haulbowline Island, where the headquarters for the Irish Naval service is today, 300 years ago.  The Club has grown and expanded since then – starting in Haulbowline, then moving to the Sirius in Cobh, before it’s current home in Crosshaven.  It is a huge part of Cork harbour’s history and it is a history we are all very proud of. 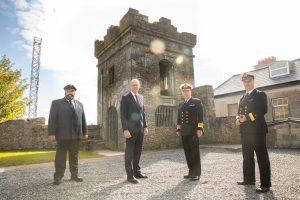 “We should have been celebrating with one of the most significant maritime festivals in the history of Cork harbour this summer, certainly in my lifetime, but because of Covid-19 none of that has been possible.  I am delighted we could hold a small ceremony here with the Admiral of the Club Colin Morehead, the Chief of Staff of the Irish Defence Forces Vice Admiral Mark Mellett, and the Flag Officer Commanding Naval Service Commodore Michael Malone, to recognise this very important day.”

Admiral of the Royal Cork Yacht Club Colin Morehead said, “I am really proud to stand here today at the original home of the Water Club of Cork, 300 years on from when it was founded by 25 pioneering individuals, alongside Minister Coveney, the Chief of Staff of the Irish Defence Forces and the Flag Officer Commending Naval Service. It is with deep regret that we had to reschedule our celebratory events, but public health must come first.  We hope that by 2021 we will be in a much better position to truly celebrate the momentous feat of having the oldest sailing club in the world here in Cork.

“I hope the public will visit the excellent exhibition at the Sirius over the coming months.  As branch manager of AIB in Cobh, I am proud to have this exhibition in the town and to have it sponsored by AIB.  I would like to sincerely congratulate the team at Sirius.”

A number of sailing events are currently still scheduled to take place from September to November 2020, including the AIB Cork300 Autumn League which will be held over 5 weekends leading up to the October Bank Holiday.  This is expected to be the largest yacht racing event on the South Coast of Ireland this year.  Sailing teams from across the country also hope to compete in Cork Harbour for the title of AIB Irish Team Racing National Champion 2020 from 21-22 November.