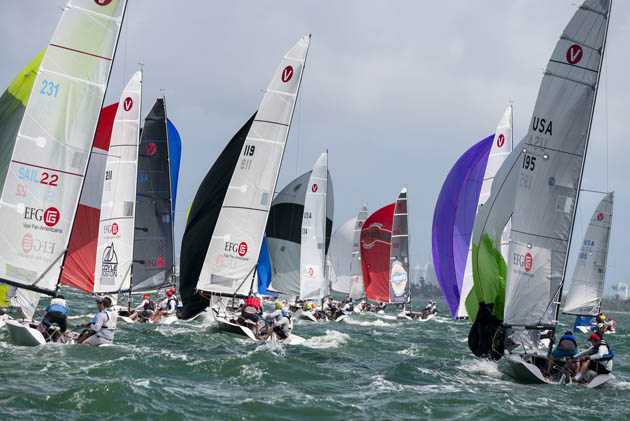 Racing has finished at Biscayne Bay and ‘Antix has’ maintained 7th overall position.

Great to be reporting again on Bacardi Miami Sailing week but strange not to be writing about the Star Class. As you will all know by now, this class has been dropped from the Olympic regatta and the intense competition of this great class will surely be missed. However, the Royal Cork Yacht Club will still feature at the event albeit in another class. Yesterday it was hot, hot, hot in Miami for the 3rd day of Star racing in the 88th Bacardi Cup and it was also the last day the Stars would be alone on the bay as today the remaining classes, J/70, M32, Viper 640 and VX One, will begin racing in the 6th BACARDI Miami Sailing Week presented by EFG Bank.

Proudly representing Royal Cork Yacht Club will be ‘Antix’ a Viper 640, sailed by Anthony O’Leary, whose sailing triumphs are too numerous to mention here, but are known to all on the sailing scene, and crewed by Robert O’Leary and Tom Durcan. The Vipers will be remembered from Cork Week 2014 when they raced against the 1720s.

Racing will continue through March 7th.