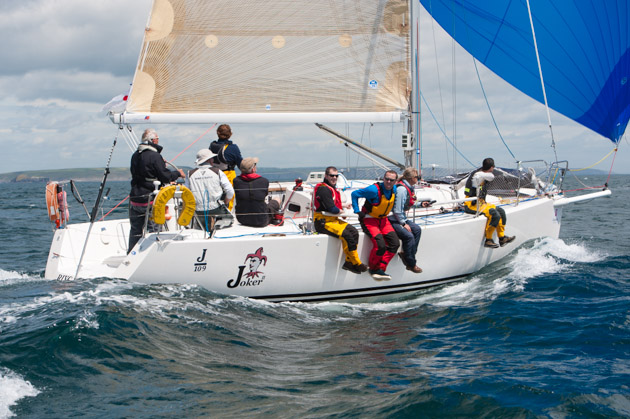 John Maybury’s J109, Joker II, continues her winning form this season after victory in this afternoon’s light and shifty opening race of the 2013 Volvo Dun Laoghaire regatta. Nearly 3000 sailors are afloat on Dublin Bay for the four day regatta that is the biggest sailing event in the Irish Sea area. The regatta got off to a prompt start in spite of forecasts of no wind with all 25 classes completing the first day’s programme.

Local sailor Maybury, from the Royal Irish Yacht Club, who was a class winner in June’s Sovereign’s Cup, took the first race of the 14?boat J109 fleet by a considerable margin, making every use of multiple Olympic keelboat helmsman Mark Mansfield on board.

Conditions could not have been more different than the first race this time two years ago when strong southerly winds gusted to gale force in the biennial event.   Today was equally as testing but for completely different reasons as sailors struggled to keep sails filling in the gentle sea breeze and strong sunshine that prevailed. ‘It was light and shifty, you really had to keep your head out of the boat’ said Mansfield, a veteran of the 1992, 1996, 2000 and 2004 Olympics in the Star keelboat.

Racing is being staged until Sunday over eight separate courses and a combined fleet of 393 boats, with 120 visiting yachts.

An impressive line-up of 12 class zero boats has made Volvo Dun Laoghaire Regatta the biggest turnout this year for the 40-footers.
Ten are visiting boats, but first race honours are staying local with Howth’s well campaigned Mills 36 Crazy Horse (Alan Chambers and Norbert Reilly) taking a win from the Clyde based First 40, Zephyr (Stephen Cowie). Third this afternoon was Swansea’s Dark Angel, a Dubois 37 skippered by Anthony Ackland.

In the Class 1 16 boat fleet the recently crowned Irish Class 1 champion, Bon Exemple, a new Xp33 design, is on top again beating Fairlie’s Mat1010 in the opening round. Third was Paul O’Higgins’ Rockabill from the Royal Irish Yacht Club.

The 2011 winner of the overall Volvo trophy Ken Lawless is back in contention again but in a different boat. His new vintage quarter tonner Cartoon was fifth in today’s opening race in one of the regatta’s biggest fleets today but taking the gun in this 24-boat division was the IRC Class 3  National Champion Quest, skippered by Barry Cunningham of the Royal Irish Yacht Club.

In the one design and dinghy divisions, sailing in the centre or the north west of the bay, there were plenty of familiar names at the top of the fleets. Tim Goodbody leads the Sigma 33s, Ian Mathews the Flying fifteens, Gerry O’Connor the Squibs and Michael O’Connor in the SB20s.

Sailing in Seapoint with a 120 degree wind, a nine boat Fireball fleet sailed two races with winds strong enough for marginal trapezing. Both counting a first and a second, the Clancy Brothers are tied with Brian Byrne and Stephen Campion for first place.