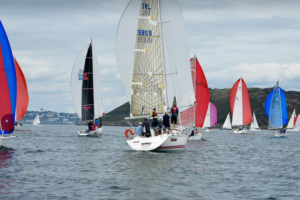 The 2017 At Home regatta was a great success for the Keelboats this year in some very tough conditions. Saturday was a lovely bright sunny day with a light southerly breeze, which was due to build as the day progressed. Our Rear Admiral Keelboats assumed his usual role for the At Home as PRO and happily assisted by family, set up a start area just east of No. 3 channel mark.
At 11.55, 26 boats where in the starting area and ready for another great weekend of racing. After some minor delays the Spinnaker fleet got off on race one closely followed by the White Sail Class. With race one finished and all boats returned to the starting area, race two got under way shortly after 1430. Once the fleets race in the outer harbour area finished racing they returned to the club for some well-earned refreshments and a BBQ.
On Sunday Morning, out of the fog appeared the mighty Hugo Boss boat, sailed by Alex Thompson and Nicholas O’ Leary with his new Ireland Ocean Racing campaign. The marina was busy all morning with people visiting the very impressive IMOCA 60. After this great diversion we were faced with a difficult situation, the forecasted 6 – 8 knots from the south had not materialized. In fact, instead we had 0 – 3 knots and a blanket of fog with a visibility of 50m at its worst.
It was decided to postpone ashore until the fog lifted and the wind increased. The PRO was on station just under Camden watching and waiting, giving half hourly updates to the fleet. Eventually at about 13.15 the breeze was up and the fog lifted enough in the inner harbour to get the last race under way. The fleet made their way out to Cage channel mark and by 14.15 the final race was under way. All forms of navigational skills were employed for this race as the fog once again descended on the fleet with a visibility of less that 50m at its worst. However the PRO instructed the fleet that no Commercial shipping was scheduled that day, and the race proved a great challenge for all.
With racing finished for the day it was time to enjoy the great fun activities back at the club for young and old alike. Congratulations to all class winners. See link to the keelboat results here. Pictures of the weekend here.