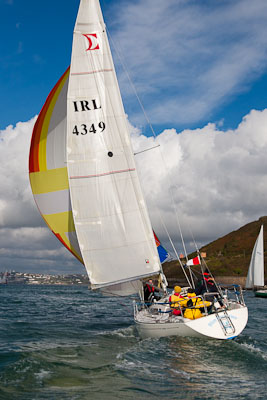 Today saw race four of the Marshall Marine  Textiles League and again the fleet of 20 intrepid mariners turned up at the line  following a morning where the rain was coming down in  straight sheets.  The Race Committee,  anticipating changes in the weather,  had a prepared a course of four rounds that gave them the ability to shorten at any time.

The race started in about ten knots of breeze and the fleet were sent to No. 5 port, 14 port, Cage Starboard and then on to round 2 that took them to 12 starboard, Cage starboard and with a lightening breeze that died altogether, it meant the race was effectively finished  after round  3.

It was a day with a strong tide and the only item of note was a large ship entering the harbour through the fleet and while the faster boats were able to get ahead, the  slower boats were caught and had to pass behind.

With four races of the league now sailed and with a discard applied in IRC All in, Anthony O’Leary in Antix Beag leads on 6 points with Diarmuid Foley’s Anchor Challenge second on 7.5 points followed by Frank Doyle’s Endgame on 14 points.  In ECHO All in three boats are on 18 points each, Anchor Challenge, Endgame and Richard Lord’s Blue Peregrine.

The penultimate race will take place next Sunday, December 2nd.