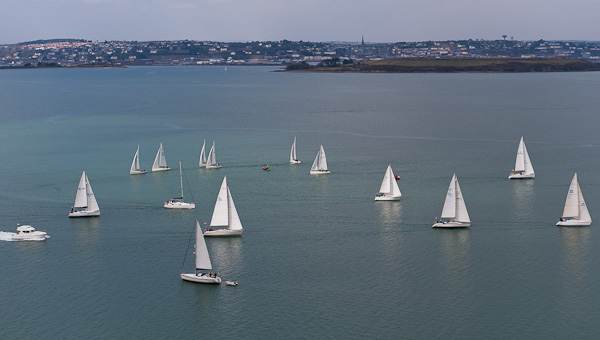 And they’re off! The cruisers heading for No. 3 while the 1720 fleet await a start for a race to Monkstown for the commencement of Monkstown’s April League tomorrow (Sun). Picture Robert Bateman

Light southeast winds and cold temperatures despite the bright sunshine greeted the competitors at Royal Cork today in the first of the cruiser leagues for 2013.

Six boats came to the line and they were sent on a beat to Number 3, back to Grassy and then in the harbour to Number 12 and next to Corkbeg before finishing at the Grassy.

Commercial vessels having right of way, Brittany Ferries Pont- Aven and a coaster created a minor stirring amongst the competitors with two yachts having to await their passage through the fleet.