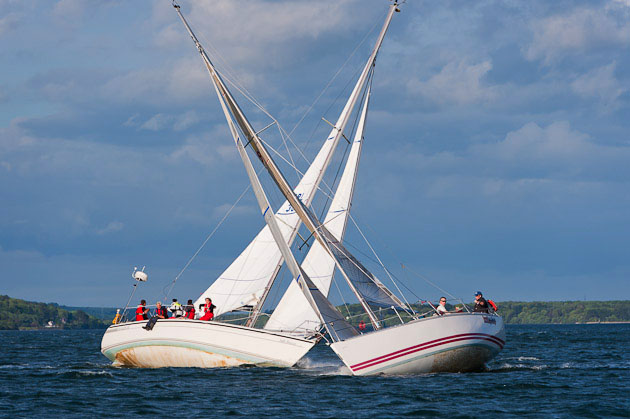 While it may not have been the greatest of summers so far this season, the  Marine Motors sponsored Mid Summer Madness evening in the club, also combining the Union Chandlery Thursday Night League and the O’Leary Insurance Group Friday White Sail League, took place on a gloriously sunny, windy evening providing excellent racing.  The much coveted prize from Marine Motors was a Suzuki 2.5 4 stroke engine.

The wind was from the west with some south in it. Race Officers from the National 18 fleet, Martin Almond assisted by Colin Chapman, made up courses for the twenty eight boat fleet.  The course for Class One took in 8, 11, 20, 13, Corkbeg, and finish.  The other fleets were all sailing in the same vicinity and they intermingled on the water with the Cove Sailing Club Friday Night League and it all made for a great sight.  While many boats showed some signs of preparing to hoist their spinnakers very few in fact did so because the wind was shy and a little gusty.

Then it was time for apres sailing food and appetites for the BBQ had been well whetted by the ideal sailing conditions.

Finally came the moment all had been waiting for –  the great draw.  Three names were drawn out of the hat, Paul O’Shea, Martin Almond and J.J.O’Keeffe and the winner was J.J.O’Keeffe of Slo Mo Shun and the remaining two received bottles of champagne.

Following all this Jimmy Crowley’s entertainment carried on and the strains of The Boys of Fairhill could be heard winging their way down the harbour and giving an idea of the great atmosphere being enjoyed by all.