To avoid the foggy conditions enveloping Newport on the penultimate day of racing for the 2015 Rolex New York Yacht Club Invitational Cup, the fleet was sent up Narragansett Bay where 8-12 knots of breeze allowed the race committee to run three races. After three days of racing on Rhode Island Sound, moving the race course inside the Bay played to the strengths of the four American teams: California’s Newport Harbor Yacht Club and Marblehead’s Eastern Yacht Club each won their first race of the series, while Seattle and New York Yacht Clubs had consistent results.

“We took a different approach to the way we were starting and it seemed to work,” said Bill Lynn, skipper of the Eastern Yacht Club team which posted finishes of 1-7-3 and currently stands second overall heading into the final day of the competition. “We were over early in the second race, and our comeback was more to do with luck than skill.”

Although Newport Harbor Yacht Club has entered the event previously, helmsman Jon Pinckney had never seen a Swan 42 before this week and is racing with a mostly a new team, with no time in the boat or experience in the regatta. “Going into today, a lot of good clubs were further down in the standings, which means that everyone has picked up their game,” said Pinckney who thinks he underestimated the level of competition. “The foreign teams have figured out what they need to do; the first three days of this regatta they were all doing better and the North American teams that had traditionally done better were not doing as well. Something has happened where everyone has stepped up their game.”

Newport Harbor Yacht Club posted finishes of 4-11-1 yesterday and is seventh overall with 77 points. Pinckney said the team’s goal was a top-five finish. “Today was a total change of momentum, which was what we needed; we just hope to carry the momentum into tomorrow. It’s a great regatta. New York Yacht Club does not spare anything in the details on and off the water: the race management is perfect, then you get on land and everything is done correctly.”

For Seattle helm Andrew Loe, the key to the day was the ability to stay in the game when things did not go their way. “This is an opportunity to test ourselves against the best. For the most part, money is not the major issue. You win races because you prepared and you’re good at sailing – not because you spent more dollars. That’s always the most fun way to compete.”

Although the Japan Sailing Federation won the their second race of the series, their finishes for the day – 15-1-15 – dropped them two places down in the overall standings. They are now sixth overall with 75 points.

Two races are planned for the final day of the regatta, today,Saturday, September 19, which begins with a parade of sail by the competitors through Newport harbor, and past the New York Yacht Club dock where they will receive a canon salute and cheers from team supporters. The winning team will be presented with a Rolex timepiece and the Rolex New York Yacht Club Invitational Cup trophy.

We wish the team well for today’s racing. 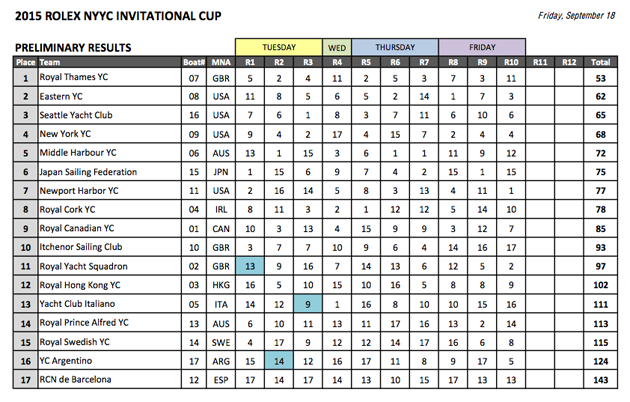