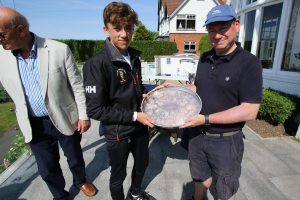 We had excellent sailing conditions over the first two days with winds ranging from 7 to 13 knots under glorious sunshine.

The competition was strong especially from the GBR sailors.

After Day one after some excellent sailing over 3 races  we had 3 RCYC sailors in the top 5 – Hugh Lynch (3rd),Darragh Collins(4th) and Cillian Foster(5th).

Day 2 – We had 4 races after which  we had a mixed bag of results with Tim Evans GBR leading with 5 bullets  but Hugh Lynch got a bullet in the 6th race and  broke his winning streak .

Day 3 – Very light winds awaited us at the club and the possibility of getting 2 races in looked slim.

Our sailors launched and drifted to the race area but thankfully the wind picked up – we got in our 2 races.

After 9 races the results were as follows

Rian Collins sailing in the 4.2 fleet had an amazing event scoring an amazing 9 bullets over 9 races !!!

Not very often do you see a sailor discarding bullets …..

Congratulations to our prize winners and to all our sailors who as always represent our families and   Club so well.

It is always great to see our sailors competing so strongly against each other on the water but have  such a strong friendship once the race is over. 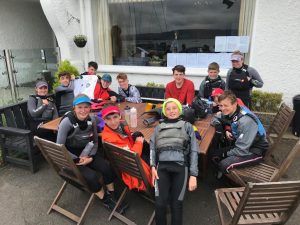 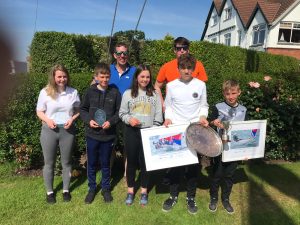