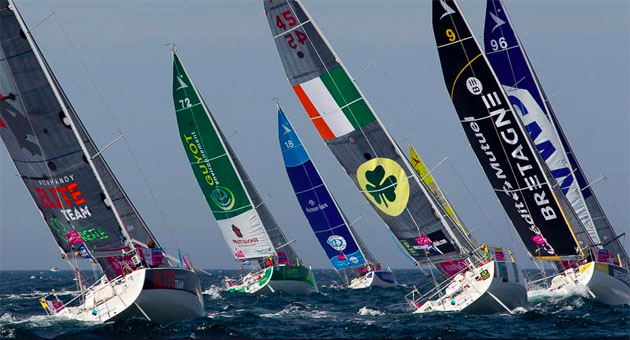 The 39 years old skipper from Quimper stole across the line at 09:07’46s local time this morning for an elapsed time of 3 days 18 hours 07 mins and 46 seconds for the 505 miles marathon. Back to back race winner Eliès finished just 27 seconds later having lead for most of the last 200 miles of the course after racing through a stamina sapping fourth night at sea since leaving Roscoff on Sunday.

It was a grueling and frustrating third leg and leaves the sailors with little time for proper rest before setting out on the fourth and final leg to Cherbourg.

Reading David Kenefick’s account of the leg in FULL IRISH Le Comptoir Irlandais gives a real understanding of the toughness and standard of stamina needed to compete in this world famous solo race:

“It was tough, frustrating and it seemed to be long but in fact it wasn’t excessive. I started nicely at the pin end and sailed a good inshore part of the course and enjoyed the fight. I find that its so much easier to start the at the pin end and make your way safely to the left of the course before the approach to the top of the course. If the line is biased to the left it works really well, if the line is neutral or tot the right there is plenty of room and you totally stay out of trouble and the worst position you’ll have at the top mark is in the teens.

The first legs are always long, over two miles and I like to get settled into sailing fast upwind straight away and not being compromised by too many boats around me. But alas the Figaro is not about being well placed after an hour, its about being well placed after 72-100 hours. To be well placed though it helps to be in the front pack at the beginning because it is rare that the back-markers get all the way back to the front. I’m in fifth place overall for the inshore prize. Once in the front pack then it is all about two things, risk management and boat speed. Boat speed doesn’t always come easily in a One Design class like this, there simply is no shortage of experience which I’m still looking to accumulate. Risk management is a nice way of saying don’t lose touch by going away from the group you are with. The race is about attrition. Over the days and nights the fleet gets spread out, its natural and its because you miss things or feel tired and not sailing at your best. If you manage to stay with the pack and sleep and stay sharp you will manage to last longer in the pack. Its taken me a while to work all this out, two years now.

Leg 3 was going well for the first 24 hours. It got pretty complicated at Belle Ile where there was an almighty park up but I managed to get away in about the same place that I came into it. The run offshore to ODAS was going well for me too but at around eight the next morning the boats just a few hundred metres ahead of us seemed to just get something first and started to sail away from everybody else. Very quickly this was a break and our group, the bulk of the fleet got left behind. It was terrible because there was nothing we could do except be philosophical about it. At one stage the leading group was more than five hours ahead of us. 24 hours later and we had an opportunity to close the gap down when the leaders ran out of wind close to Ile de Ré on the last segment to the finish. We didn’t pass them but the gap went back to one hour instead of five. I finished mid-morning, I’m shattered and burnt and hungry. We have just over two days to turn it around and head back out again for the final leg to Cherbourg which starts on Sunday. But, tonight a Comptoir Irlandais Whiskey tasting event with my sponsors and fellow skippers. Thanks to all for your support and talk again soon.”

We hope to join with David again on Sunday for the start of the fourth and final leg of La Solitaire du Figaro 2014 from Les Sables d’Olonne to Cherbourg.