Today was the medal race qualification day for Annalise Murphy in the Laser Radial class. She reclaimed the overall lead after a third place in Race 9. The lead was brief as a seventh place in Race 10 means she is now third overall. Incredibly only one point separates the top four sailors in what will undoubtedly be a nail biting medal race on Monday. She briefly regained her position at the top of the Laser Radial fleet in what was a dramatic Race 9. Two general recalls saw her opponent Alison Young (GBR) disqualified along with the sailors from BLR, NZL, GER, TUR and IOA.  Finally the race got under way and Murphy got off to a good start. By the third mark she had taken 40 seconds off the Chinese leader to lie in second place. She continued to fight hard within the top three against Xu (CHN) and Cebrian (ESP) to finish in third place, reclaiming her spot as first overall. Her closest competitors Bouwmeester (NED) finished sixth while Van Acker (BEL) finished eighth and this gave Murphy a four point lead on second placed overall Van Acker and third place Xu who both had thirty one points to Murphy’s twenty seven. 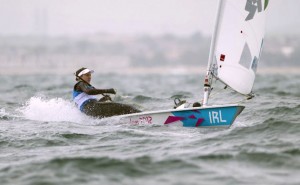 Race 10 certainly proved to be a nerve racking way to finish the fleet racing. The first five boats to round the first and second marks were the top five medal contenders; Murphy (IRL), Van Acker (BEL), Xu (CHN), Bouwmeester (NED) and Young (GBR). Murphy then separated from the rest of the fleet taking the right hand gate while the others went left. It was a risky move but her gutsy tactics kept her in the top five. She then had a tough reach to the fourth mark and slipped back to seventh and stayed there costing her the overall lead. She finished the fleet racing in third overall with just an incredible one point separating the top four sailors. As the medal race is worth double points everything will hinge on Monday’s race. Leader Xu (CHN) is on 33 points, in second is Bouwmeester (NED) also on 33 points, in third is Murphy (IRL) on 34 points and in fourth is Van Acker (BEL) also on 34 points. 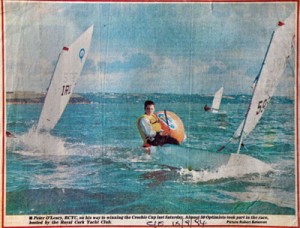 From then to now. Picture from Cork Examiner 1994 shows a young Peter O’Leary sailing his Optimist. In 2012 he is the first ever Irish Sailor, with his crew David Burrows, to qualify for a Medal Race in an Olympic Regatta. Picture: Robert Bateman

Today was a rest day for Peter O’Leary and David Burrows in the Star class. They have successfully qualified for the medal race that will take place tomorrow. This race will take place at 13.00 hrs
tomorrow (Sun)  and we wish them the very best of luck.