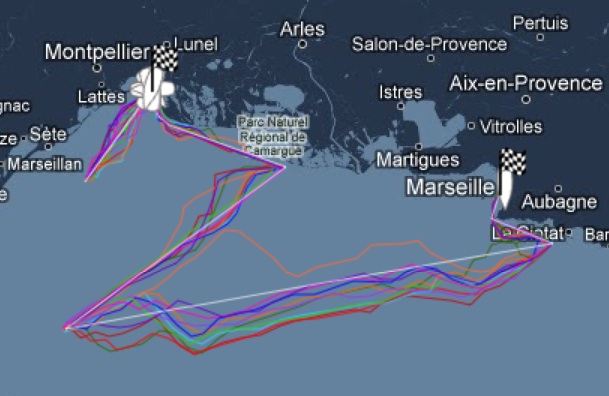 The ICOM Cup is a three stage single handed offshore race in the qualification procedure to compete in Le Solitaire du Figaro 2013.  The first stage of the ICOM Cup was a 140nm offshore race to Marseille followed by a day of inshore racing with the return race being somewhat longer with an extra two legs to round the Séte buoy before finishing and thus adding some 36nm to the course. This was the longest race to date in the qualification process. The race threw up all sorts of conditions that included shredding his mainsail in 36 knots of wind gusting 42 necessitating finishing the first leg under jib alone.

To give an insight into the race experience I quote as follows from David on the return leg to Le Grande Motte:  “We are thirty hours into this race now and although I am in eighth position I have broken away from the leader of the last group.  We are moving very slowly along the beach of the Rhone Estuary.  The two leaders are ahead around the next mark and have got away, but the group of boats ahead of me from fourth to seventh are most certainly catchable.  The sun has gone and it’s getting dark and so of course the sea breeze has gone.  This transition is my chance.  Got to stay focused, keep myself safe, and work intelligently!!”

Again I quote:  “I finished fifth, the boat ahead was Henry Bomby a twenty two year old from the Artemis Offshore Academy who finished just a few lengths ahead of me after forty eight hours of racing”.

This year the 44th edition of  La Solitaire du Figaro will start in Bordeaux and go via Porto, Gigón and Roscoff to the fnishing port of Dieppe a distance of approximately 2000 km. The race will commence on June 2nd, 2013.