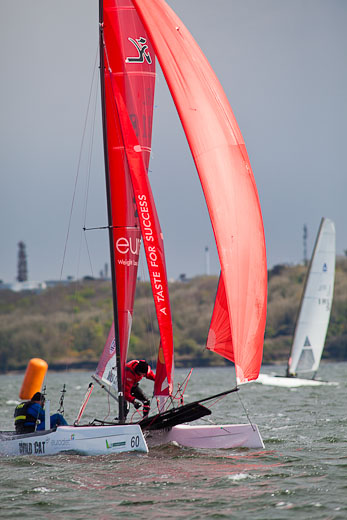 For sure when Spring is in the air can summer be far behind.  In spite of the cold the sun was shining brightly and there was a buzz around the club today.  The  young stay at home Oppies were out, the Multihulls were competing  in their Southern Championships and last but not least, the cruisers were emerging from their winter hibernation for the second day of the O’Leary Insurance Group April White Sail League. 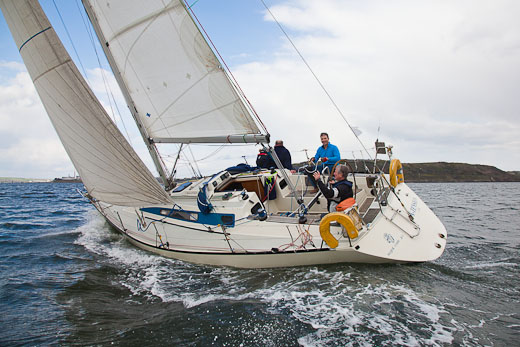 Conor O'Donovan's X-Tension gets a good start on Day 2 of the April League. Picture Robert Bateman

While short in numbers today, not surprisingly with the 12/15kt N/NE skinning breeze, there was no lack of enthusiasm in the League as was evidenced by the pre start manoeuvering on the line at the Grassy start under Race Officer Mark Ring.  The course was 66 and Conor O’Donovan in X-tension made the best of the start coming off the line.  He was followed by Kieran and Liz O’Brien’s Magnet with Ria Lyden of Ellida hitching a ride today, Pat Vaughan in Aramis was next followed by last weeks winner Simon Brewitt in Callisto.

Meanwhile the Optimists who were too young to travel to the Irish Youth Nationals in Dublin were sailing on the Curlane Bank and not too far away was the colourful sight of the sails from the Southern Championships of the Irish Multihull Association.  This event attracted entries from Ballyholme, Blessington, four members from the Galway DART 16 fleet and the home club RCYC all scorching up and down the windward/leeward courses.

To literally add to the buzz three helicopters brought great interest to the area where they were flying throughout the afternoon.  One was from the Air Corps and there were two Sikorskys from Search and Rescue.  It was a great thrill for the competitors to note that one of these was none other than the magnificent new Sikorsky recently added to the service.  The helicopters were part of the National Air and Sea Rescue Demonstration that was taking place off Cobh as part of the Titanic  remembrance ceremonies and was most impressive particularly as the Brittany Ferries magnificent flagship Pont-Aven was making her 4pm departure from Ringaskiddy and passed through the area creating a wonderful scenario.  Also in attendance was the Ballycotton AWL Austin Lidbury and our very own Crosshaven Lifeboat Miss Betty.

Racing continues tomorrow in the Multihull Southern Championships and next Saturday for the O’Leary Insurance Group White Sails April League.

“From Golden Apple to ?” An evening with Ron Holland
Report from Day three of the 420 Class at the ISA Mitsubishi Irish Youth Championships