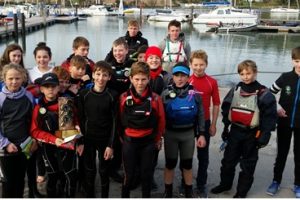 By Annamarie Fegan on November 2, 2016 in Latest, Optimist

Last Saturday 29th October saw 16 of our club sailors take part in the annual Team Racing Contest. These were masterfully streamed into four teams allowing for less experienced sailors to race with their older counterparts as was very much envisaged by the trophies donator Mr John Elmes. Conditions were perfect for team racing being light and in the main southerly, which coupled with a flood tide on the bank meant that we got 17 races away cleanly.

Each team raced against each other twice then the finals had a best of three to determine the finishing order.

On the water adjudication was looked after by John and Harry Durcan and our thanks must also go to the parents who helped out. It is the classes view that team racing is well work promoting as it improves communication skills boat handling and tactics and also allows the sailors to work together. It is also the format for second and third level sailing competition so instilling this early is most beneficial. Our club is, as it has done now for many years, sending a team early in 2017 to Monaco to compete in a prestigious international Team racing event and it will be comprised of sailors from the above event. An announcement will follow closer to the time. 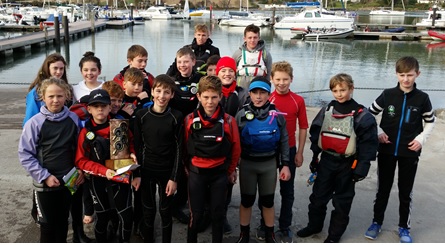