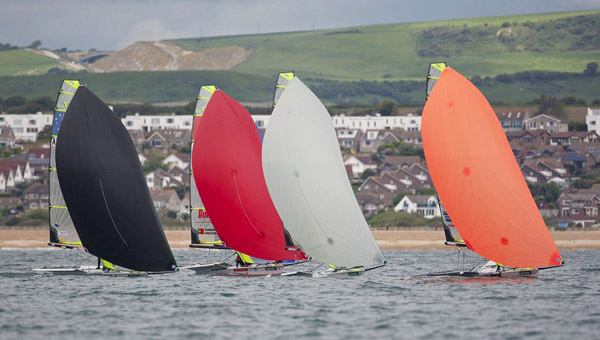 Winds were light yesterday but the 49ers managed three races and Ireland's Ryan Seaton and Matt McGovern had an excellent first place in Race 3 . Pic. onEdition

Following the excellent day long blog on the event website, it was obvious that the fickle light winds were bent on creating mischief for the organisers and this they surely did.

By early afternoon the fleets had returned to shore as the little wind there was had disappeared.  There was a wait of several hours for the competitors ashore during which a plaintiff call was put out on the live blog from the New Zealand  team appealing for milk and promising a coffee in return! This provided one of the lighter pieces on the blog during the very long day for the organisers and competitors until eventually at approximately 4pm the fleets were called to launch again when word had it there was approximately seven knots of breeze.

In the Star Class they managed to get in one race and Peter O’Leary and David Burrows finished in fifth position. Denmark led followed by Canada and Switzerland with Scheidt of Brazil in fourth followed by O’Leary and Burrows and a host of other world Star names behind including Domingos, Portugal, Loof, Sweden, Pepper,New Zealand, Melleby, Norway, Percy, Great Britain and a plethora of other names that would normally present themselves at the top end of the fleet.

Other Irish results at the event were Ryan Seaton and Matt McGovern from Belfast Lough in their 49er skiff who won the third race at a very late time in the afternoon having finished 8th and 11th in their previous two races.

Annalise Murphy from National Yacht Club, well used to race wins in slightly heavier weather, finished 16th and 8th in her two races of the day.

James Espey in the laser Class scored an eighth in his only race of the day.

Gerbil Owens and Scott Flanigan, who recently won the Delta Lloyd Regatta at Medemblik, achieved a 19th and 15th in the 470 Class and in the Paralympic Sonar Class John Twomey  with Ian Costello and Anthony Hegarty finished 10th.

Hopes are high that tomorrow will bring better wind conditions for the fleets.