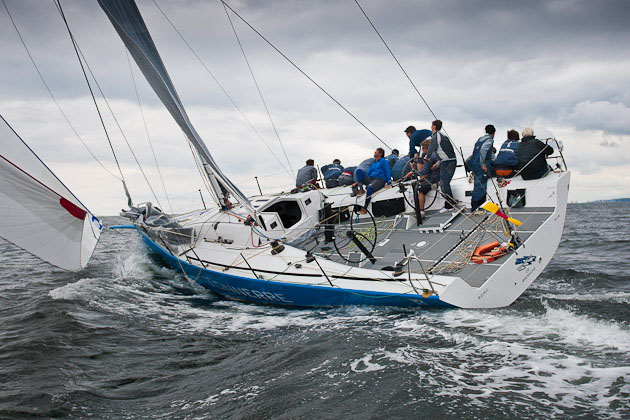 The first day of racing at Cork week to day started in a light west/norwest and, as is usual from this direction, shifty breeze.  Former RCYC Admiral Paddy McGlade’s Sabrone  was on station three miles south of Roche’s Point with the Race Officers for the Olympic course David O’Brien and Richard Leonard on board. Today on this course they were handling J109s, IRC 2, IRC 3 and White Sail. Meanwhile, further to the east with the Macavity Leopard47 ft Catamaran were Race Officers Phillip Cowman and Robert Lamb who had the unenviable task of organizing the trapezoid course with deep water and a strong running ebb tide and coupled with the shifting breeze, no enviable task.  On this course were the Zeros, IRC One and the 1720s.  For the most part it was extremely civilized racing with only one reported black flag start after a general recall.

What was noticeable about the fleets was how the local sailing crews can shift around from boat to boat and week to week both in and out of the country. To name but two, Joe Bruen was noted on Piet Vroon’s Tonnerre de Breskens and Paul Gibbons was seen helming a 1720 where two weeks earlier he was helming Anchor Challenge in the Coutts Quarter Ton Cup at Cowes.

Fortunately the heavy rain that was forecast did not materialize but was just an odd sprinkle of Irish mist that did not amount to much.  The forecast would appear to be for somewhat similar conditions tomorrow.

Tomorrow the boats will be swapping courses and this will obviously make for variety and added interest and perhaps challenge for the boats.