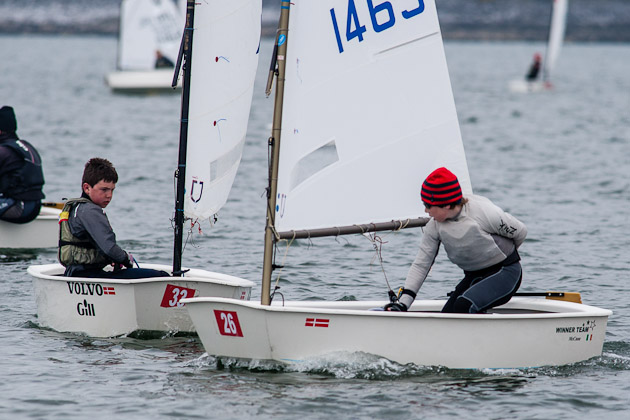 James McCann  (1463) the third RCYC member in the top five of the 2013 OptimistTrials. Picture Robert Bateman

As expected, today was light with 4/5 knots  of South/South Easterly breeze and this increased to about 8 knots for the second race of the day. This completed the schedule of sixteen races to count for the nineteen places available for the 2013 Irish Optimist Squads.

With a flood tide and a current flowing over the Curlane Bank as it divided around Spike Island, both races had general recalls and I got an excellent account of the racing from Toby Hudson –Fowler of the Royal St. George Yacht Club.  He is a very articulate and personable young sailor and a joy to speak with.  He is a great ambassador for the RStGYC and a great credit to his family.  He described the recall for the first race that was blackflagged and also the second race that suffered two general recalls and also blackflagged. He was very interesting in his description of the conditions and the wind shifts coming off the land. If he is typical of the competitors coming up in the Optimist Class then they are indeed very fortunate.

The only change in the top five positions today was that James McCann and Alix Buckley changed places with McCann moving to fourth place and this meant that there are three Royal Cork sailors in the top five.  It was  also a triumph for Denis Passke of TeamX who had four out of the top five overall results namely Johnny and Harry Durcan RCYC and Megan Parker and  Alix Buckley both SSC.

Interestingly enough Cathal O’Regan, a Junior sailor from the Royal Cork, took the bullet in the first race of the day and that is a great fillip for his confidence. In the last race of the day it was Peter Fegan of SSC took the win with Harry Durcan second.  When the three discards were applied Harry Durcan was but a mere three points behind his brother Johnny who took first place overall in the Trials.

The next Optimist event listed on their calendar is the Ulsters to take place on May 25th and 26th, 2013.