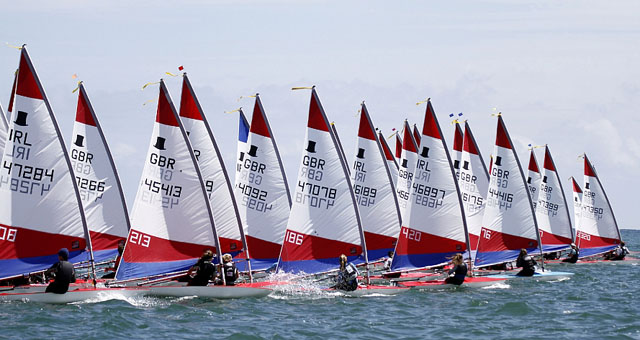 Ireland has once again produced a world champion sailor, this time in the form of Liam Glynn from Bangor, Co. Down. The teenager was today crowned the 2013 Topper World Champion at the international regatta at Loctundy in Brittany, France having been sailing all week against 101 competitors.He’s been training really hard this season after winning silver at the ISA Youth Nationals and it’s very rewarding for him to see all his hard work paying off.

Liam got off to a solid start with four top 3 finishes in his first four races including two fleet wins. He won yet another race on Day 2 but even with the steady breeze of 12 knots, Liam had to overcome some difficult sea conditions. Commenting after racing on Wednesday Liam remarked “The wind was quite steady but it was tricky to deal with waves and current at the starting line. Moreover beating to get the windward mark was one-sided and tide wasn’t helping”.

The sailors then faced very light conditions yesterday with winds of only 8 to 9 knots in the morning dropping to even less in the afternoon. Liam continued his dominance at the top of the fleet while trying to avoid useless risks, ultimately leaving him in pole position at the end of the penultimate day with a 13 point cushion. Commenting after racing Liam said “At the beginning I wasn’t confident enough to take risks but now given the results I feel like trying some strategies out. But in any case I really stay concentrated on my sailing and I know that at the end of the day getting constant results is more effective than trying to win each leg. As for today the difficulty was to stay under the line with the current pushing you over but I managed and got good starts.”

The decision was made this afternoon to cancel the final day’s racing due to the lack of wind. This meant that Liam comfortably won the 2013 Topper World Championships with a 13 point lead. Ireland also had three other top 20 finishes with Niamh Doran in 12th, Tom Purdon in 14th and Conor Sherriff in 17th.