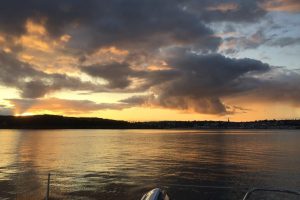 By office on September 1, 2017 in Cruisers, Latest

Last day of August, a dying northerly breeze, an ebb tide, a departing Cruise ship and some amazing cloud and sunset images made for a classic.

PRO Dave Coveney set an interesting line off the Cage buoy with a beat to no12 in a very fickle shifting breeze. Those who started at the boat end of the line gained initially up the beat but with the last of the ebb and the shifty breeze most of the fleet ended up beating up along the Curlane Bank and then trying to cut over to no12 buoy. Unfortunately for some the Bank proved too high and they ended up being towed off the mud or having to use their engines.

Coracle 4 was first to the weather mark closely followed by Alpaca and Heroes n Villains.

Then the breeze stopped and a floating spinnaker run down to Cage with the last of the ebb tide ensued. Some went east, some went west and some went south.

After what seemed like a very long time and with the light fading due to the fast dropping sun and some amazing cloud formations, a small breeze filled in from the north thus bringing the whole fleet through the finishing line within 8 minutes of each other. Alpaca was first to cross the line with Coracle and EndGame on their transom. The shortened course of 2.4nm took Alpaca 1 hour and 18 minutes to complete, a sense of how light the breeze was!

‘Cracker’ with Denis Byrne at the helm won the race on corrected time with Richard Leonards ‘Bandit’ second and Dave Lanes TaGottaWanna coming in third. Great results for the Class 3 boats

Overall after 5 races to date ‘Cracker’ is leading the large all-in fleet. The final race of this league will be held next Thursday with the usual first gun time of 18.55hrs.