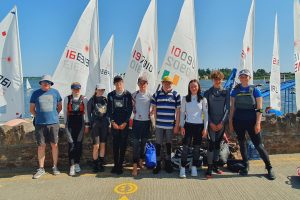 The Laser Connaught Championships were held in Wexford Harbour Boat & Tennis Club on the weekend of the 17th & 18th of July. Entries were capped at 120 with a 10 strong team representing RCYC.

Some of the team arrived early on Thursday and trained Thursday and Friday in the harbour with coach Cian Jones.

The racing on Saturday and Sunday was in light winds with 6 races in total in very hot conditions, so much that it is now know to one and all as Wexico.

Congratulations to all the sailors who put in great effort with lots of team spirit resulting in a number of individual stand out results including James Dwyer 1st in 4.7, Darragh Collins 2nd in 4.7 and Michael Crosbie 1st in Radial. Full results and images from the class are available here. 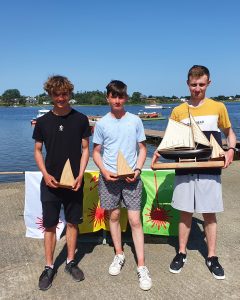 The lasers are now targeting the 4.7 worlds in Dun Laoghaire 7th to 14th of August and the Laser Nationals the following week in Crosshaven. 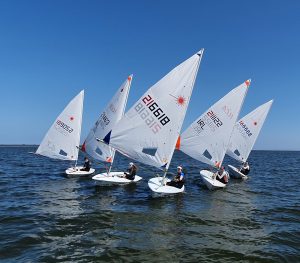 Best of Luck to Harry Twomey, Dorothy Mathews, Harry Pritchard, Jonathan O Shaughnessy and Michael Crosbie all representing RCYC in the laser ILCA Radial Youth Championships on Lake Garda Friday 23rd to Saturday the 31st of July. Further congrats to Michael and Jonathan who have been selected for the ISA academy and will travel with that team to the worlds.