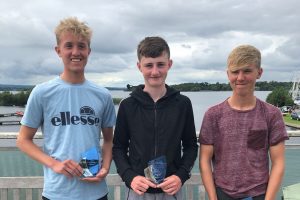 55 Lasers took part in this event over a weekend where we were warmly welcomed by the members of Lough Derg Yacht Club.

Racing got underway first day in very light and shifty conditions. The PRO, Liam Moloney, did very well to finish the first race in under an hour with a shortened course.

In the Standard fleet Tom Keal sailed very well winning the first race and then following it up with another bullet. He didn’t have it in his own way however but still managed an additional 2 thirds to end the day at the top of the leader board.

In the radial fleet Jack Fahy, on his return to racing after a near years absence, found himself being challenged by RCYCs Rob Keal among others. Three straight bullets by Fahy put him in a commanding position going into day 2.

In the 4.7, Royal Cork’s Michael Crosbie had mixed conditions as well. The PRO went for four races the first day as lighter winds were forecast for day two. Crosbie repeated his recent good form with  4, 2, 2, 1 to end the day as leader.

Sunday started a bit colder with light winds from the north and the fleet moved to a different part of the lake. The first race was shifty for everybody and died but eventually a following breeze (which bunched the fleet ) allowed Tom Keal, Fahy and Crosbie to win their respective races. The last race on Sunday had better breeze noteworthy for Rob Keal showing great form to get a bullet giving him second place overall in the radial fleet with Crosbie also dominant with another first in the last race.

All in all a good day for Tom Keal winning the Laser Standard on count back, Radials was won by Fahy with Rob Keal in 2nd and Crosbie getting his third provincial championship in a row in 4.7’s.

Royal Corks Kate Fahy, Jack O Sullivan, Maeve Leonard and Derry McAleavy all had a good event and we look forward to the nationals next month at Ballyholme.

Our thanks to LDYC for their hospitality and their excellent course management team.

Topper Worlds 2019 conclude in Medemblik with Foster leading the Irish!
Major success for the Royal Cork’s Twomey and Durcan at 29er Worlds