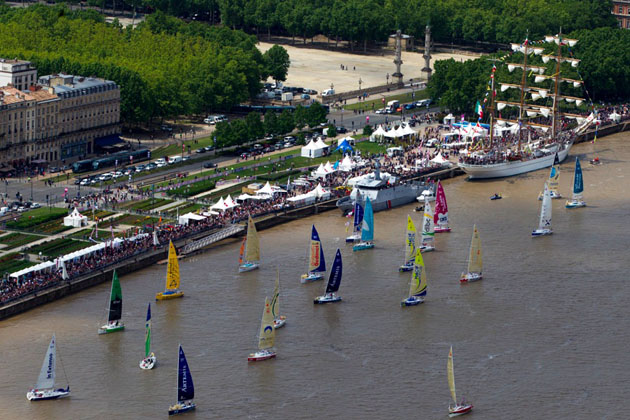 Done and dusted with the prologue, that gave the skippers the opportunity to say goodbye to Bordeaux and the huge crowds gathered on the riverbanks, the fleet reached Pauillac and everyone’s mind is now set on tomorrow’s start. The first is the longest, 536 nautical miles, of the four legs and also the newest with a start and a finish that are almost completely unknown to the skippers. A relatively easy crossing of the bay of Biscay, a strategically tricky passage at Cap Finisterre and a far trickier approach to the Portuguese coast: the outcome in Porto could be unexpected and unpredictable…

An unusual prologue to the event:

With the river Garonne’s level rising steadily for hours and because of the presence of drifting wood that could increase the already risky descent of the river, the Race Direction and the skippers opted for an unusual starting procedure of the prologue Bordeaux-Pauillac/Eric Bompard cachemire: the 41 boats, including Rookie Sailor David Kenefick of Royal Cork Yacht Club, gathered in the starting area and crossed the line in groups of four, one every minute, for a most unusual pursuit race. For the superstitious sailor, a victory in the Prologue of the Solitaire du Figaro-Eric Bompard cachemire is bad luck. As a matter of fact nobody, in the previous forty three editions of the race, has ever won the prologue and the race itself and the parade of sail does not award any point. But competitors are competitors and do well in front of the cheering public, the supporters and the sponsors that is both motivating and gratifying for eveone.

The first leg of the 44th Solitaire du Figaro – Eric Bompard cachemire is the longest, newest (start and finish locations have never before been visited) and potentially the toughest of this year’s edition. Twenty six miles of almost fresh water with the current and the sand banks on the Gironde estuary, followed by the passing of the spectacular Cordouan lighthouse, a westbound crossing of the Bay of Biscay, the always tricky rounding of Cap Finisterre and a potential tough navigation along the Iberian coast including the final approach to another river mouth in Porto, a stage that could prove even more complicated given the absence this year of the Azores’ High on Western Europe.

The weather conditions, at least for the first number of hours, look set. The forty one solo sailors are expected to sail east of the high-pressure ridge generating some northerly breeze and later head towards the south side of the Azores’ High, that creates an easterly wind flow, down to Cap Finisterre. In the Bay of Biscay the fleet should encounter moderate conditions, 10 to 12 knots in the Gironde and some 15 in the gulf, later increasing and reaching 25 knots. But, as the Iberian peninsula represents a barrier, this effect could well be short lived, and the fleet could be left drifting in very light airs. According to the latest calculations, the front pack could round Cap Finisterre on Tuesday afternoon but the remaining one hundred and fifty miles to Porto could be the most trying.

All the skippers, experts as well as newcomers, agreed that this leg could be crucial for the final result. The youngest of all, Irish rookie David Kenefick, ‘Full Irish’ made no secret of the tension he was experiencing on the eve of his biggest challenge so far. “I’m a little bit nervous, it’s my first Figaro, my first leg and the longest of the race. Luckily the weather is going to be quite nice. It’s going to be downwind and a little bit trickier down Cap Finisterre. I think the hardest part will be getting down the river with all the broken trees floating in it.  I think we have to try hard to avoid damaging the boat. Then it’s into the first night. I always hate the first night because I get really lonely so I packed my favourite dinner: shepherd’s pie!” At the other end of the spectrum Jean Paul Mouren, Groupe SNEF, at his 27th participation in La Figaro, shared some of David’s concerns: “I expect the leg to be fast, we will be out of the bay quickly then there is a small low pressure over Spain created by hot air. I think the finish will be totally unpredictable, and filled with high tension. The first part on the river is going to be fun; winches are going to heat up but the spectacle will surely be thrilling!”

Tomorrow’s start (June 2nd) promises to be extremely exciting and will be live streamed on the official website from 12:30pm

Optimist success at the Royal North.
David Kenefick’s Dream achieved as he starts in the 44th edition of the Solitaire du Figaro