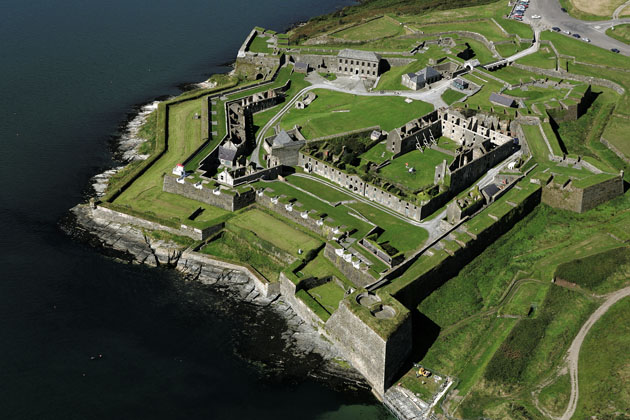 The magnificent Charles Fort at Kinsale will act as a splendid backdrop for the opening ceremony of the IODAI National Championships next Monday night at 7 pm. Picture Robert Bateman

Kinsale Yacht Club’s Michael O’Sullivan has advised they are busy preparing for the Volvo/Davy Irish Optimist Championships that will commence on Tuesday, July 31st.

Next weeks Optimist Nationals will attract almost 200 sailors aged between 8 and 15, and entries include large teams from the UK and India, and individual entries from France, Hong Kong and the US. Top class sailing  will take place over five days under the guidance of leading Race Officer Alan Crosbie.

The twelve race series will run through to Saturday August 4th. The highly competitive fleet will compete for the title of National and Open Champion and the foreign entrants can be expected to be amongst the leading contenders, with Max Clapp from the UK returning to try to add the Senior title to the Junior Open title he won last year. Irish eyes will be on our International squad who will be returning from the European and World Championships. Among these Douglas Elmes and Harry Whitaker from RCYC can be considered serious contenders, while local sailors Scott Levie and Cliodhna Ni Shuilleabhain (returning from a fine 8th place at the French Nationals) won’t be far from the leaders.

Whatever happens on the water, these young sailors are sure to bring a lot of excitement and energy to the town over the course of the weeks sailing. The programme of events for the week will start with an opening ceremony at Charles Fort on Monday July 30th at 7pm.