By Bob Bateman on August 6, 2013 in Uncategorized 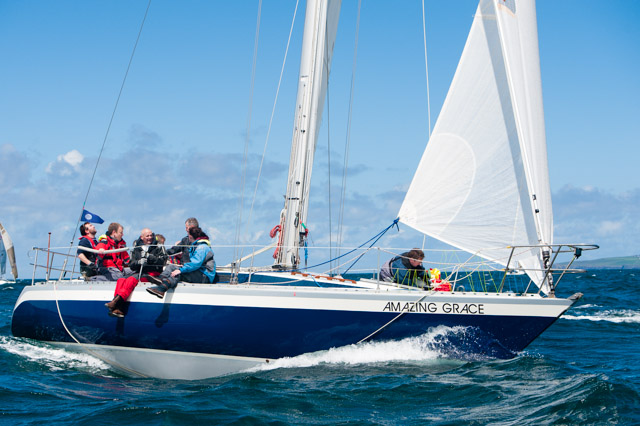 The first day of sailing in the Cork Dry Gin Calves Week  2013 was sailed in a light force 3 but with a chop brought about by the spring tides
This is the 29th sailing festival that  has been organised by the volunteers from Schull Harbour Sailing Club. The racing schedule was revamped last year to better meet the needs of skippers and crew, who generally bring their families and stay in the local area. Travelling Dublin boats include Leslie Parnell on Black Velvet, Paul O’Higgins on Rockabill V, Frank Whelan on his newly purchased Wavetrain and Declan Hayes on Indecision.  Substantial contingents based in Tralee and Waterford, and a large number of Royal Cork boats also made the journey.
Two 1720s from the CIT Sailing Club joined Infinity from Fastnet Outdoor Education Centre.

Experienced Race Officer Neil Prendeville, taking account of the slightly fresher breeze in Long Island Bay, sent the four fleets on a triangular course to a weather mark  one and a half miles west of Calf Island and then through the Calf Islands and past the Amelia Buoy. Combined Classes O/1 and 2/3 followed with a further windward/leeward leg.

The lack of a breeze inshore sensibly led the Race Officer to shorten the course for all Classes to finish offshore by the Amelia with a spinnaker finish for all cruiser classes.

Kieran Twomey in Gloves Off started the honours list in Class 0 and 1 in both IRC and ECHO, ahead of Jump Juice, Conor and Denise Phelan (RCYC) and Conor Doyle’s Freya ((KYC) respectively. Some unhappiness was felt that Classes 2 and 3 were lumped together. June’s Dun Laoghaire to Dingle race winner Amazing Grace (Brian O’Sullivan, Tralee Bay SC) took both prizes in Class 2/3, ahead of Derek Dillon in Big Deal (Foynes YC) in IRC and Donagh Russell in Bedlam (Cove SC). Local boat Michael Murphy’s Shelly D took first place in IRC in Class 4, with Rene Wubben in Seven Whistler taking the ECHO prize.

In the Whitesail 1 fleet, Dublin boats  Zephyr, Ross Cahill O’Brien, (NYC) swopped places with Andrew Knowles in Sandpiper of Howth (HYC) in the first and second places in IRC and ECHO.  Martin Lane in Chatterbox scooped the ECHO honours in Whitesail 2 from an entirely local fleet.