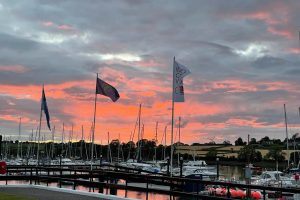 By Communications on July 4, 2022 in Keelboats, Latest

The June Thursday night league for Keelboats finished in great style. A full tide, 10 knots of breeze from the West provided ideal conditions for Race Office Richard Leonard and his team to lay a Windward Leeward course between Cork Beg and Cage Buoy. This suited well as the summer breeze faded and shifted towards the end of the evening.

Magnet (Kieran O Brien) and Crew won overall in the Whitesail IRC and ECHO league taking home the very nice pieces of silver. Trophies won include the Doughty Shamrock Dish dating back to 1915 and the Samphire Cup dating back to 1968. 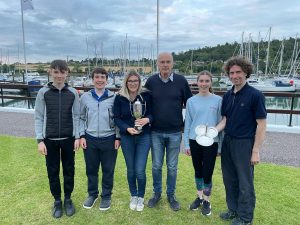 The Spinnaker ECHO league winner was Saxon Senator (Eric and Wan Waterman) and Crew. They won the Clytie Cup which dates back to 1878. North Star (Young Family) and Bad Company (Desmond Ivors Keane) were second and third overall. 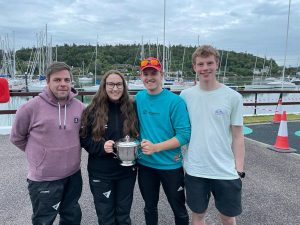 Well Done to All.