By Annamarie Fegan on April 10, 2016 in Junior Sailing, Latest, Optimist 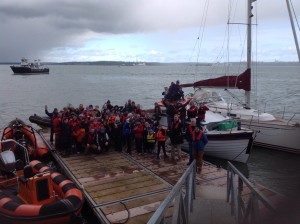 The weather Gods were on side (for the most part), as seventy plus Royal cork junior sailors, the Admiral and a number of parents headed to Cobh town for a day out last Saturday afternoon.

On arriving at Cobh, Rear Admiral Capt. Pat Farnan had pre arranged a tour of the port of cork control room located to the east of the town, where it overlooks the entire harbour. A good insight was imparted as to how the shipping traffic in and out of cork harbour is managed on a daily basis and the overview gave a good opportunity for many to ask questions that needed answering. 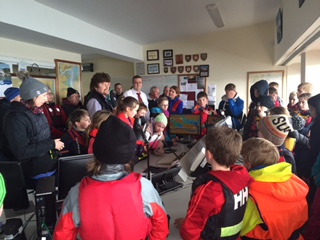 Next stop was to the quays restaurant where lunch was served to the travelling party before returning to the marina at circa 4.30pm to return back to the club. A trip to the Cobh heritgage centre was also initially on the itinerary but time did not permit this on the day so will be included on the next outing I’m sure.

Special thanks to optimist class captain Andrew Crosbie and optimist parents , Dave O Regan, Ian Venner , Jason Burns , Charlie Pritchard and Saki Curtin for skippering both their own boats and club RIBS to transport the large traveling party. Renewed thanks also to the port of cork of giving of their time on the day.

For our older teenage junior members, there is an away day around the harbour planned for early May and details will follow shortly once finalised