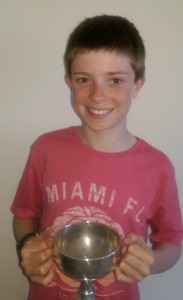 aturday to compete in their ‘at home’ regatta for 2015.

Despite the relatively stiff breeze a number of our dinghy sailors travelled with the optimist class making up the lions share. Under the watchful eye of club RIBS ‘manned’ by oppie parents and Adriele skippered by Paul Tingle, the sailors were taken under tow to the marina in Monkstown in order to step their masts prior to the FG.

Conditions continued to be blustery but this didn’t stop Cathal O’Regan who took the bullet in the twenty strong optimist class (by a very comfortable margin it must be said). Rob Keal followed in second with Killian O’Regan just behind in third. Our silver sailors also did well with with Conor Aherne finishing first, Jonathan O’Shaughnessy 2nd and Ben O’Hare third.

Needless to say Aoife Byrne, Rory O”Sullivan, Michael Crosbie, Andrea Long and Sophia MacKeown were also well up the fleet. All showed great ability and confidence to compete in such blustery conditions.

The sailors were quite happy to travel home in the relative comfort of Adrielle’s cabin while some of their parents got soaked in a rain shower on board club RIBS with oppies in tow! Thank you to MBSC for their hospitality and BBQ which was laid on after racing.

Thanks to Stephen O’Shaughnessy for this report.