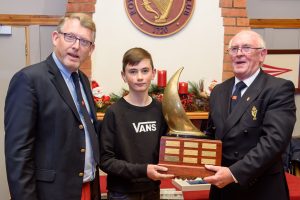 This years Royal Cork Yacht Club Junior Laying Up Supper was held on Saturday 23th 2019 in the club house with parents and junior Sailors making up the 170+ attendees.

Rear Admiral Dinghies Brian Jones welcomed the Admiral, Pat Farnan, Vice Admiral Colin Morehead and all the sailors & parents to the last social evening of the year to celebrate all Dinghy activities.

The Vice Admiral gave a presentation outlining all the activities planned to celebrate the Club’s Tricentenary in 2020 which includes eight dinghy events being held between March and November 2020 – it shall be a very busy Dinghy season with four of the eight events being Irish Nationals!

Brian also took the opportunity to thank all who provided time, expertise and resources to assist in club events and coaching during the season. A  particular note of thanks was expressed for the class captains and respective committees for their hard work during the season. An overview of the Club’s Sailing course was presented with an emphasis to book early. An additional slide was presented to show all the Sponsors that assist with sponsoring Dinghy activities through the year.

The end-of-year dinner was dispersed with the Class Captains giving an overview of their respective fleets activities during 2019 with the Laser and Topper Fleets taking the opportunity to hold their Frostbite & Bill Jones Trophy (Topper) Prize giving. 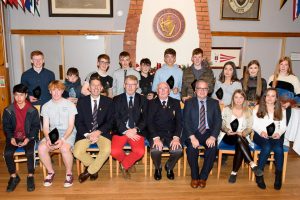 Presentations were made to the Optimists based on their overall performance for the year.  All the active Mixed Dinghy sailors received action photos from events during the year. 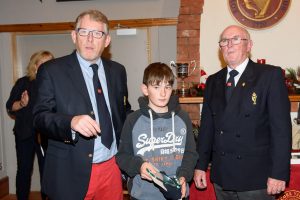 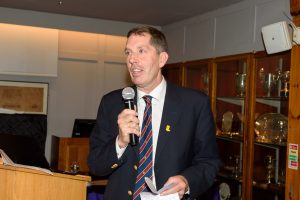 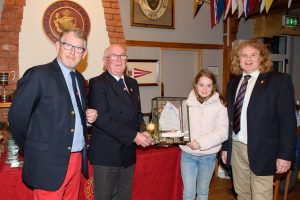 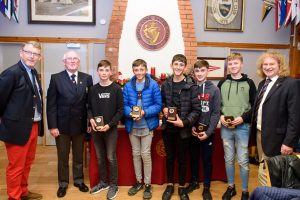 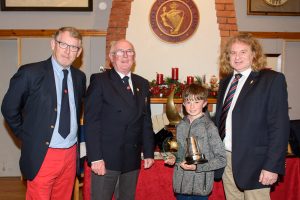 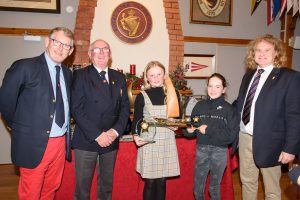 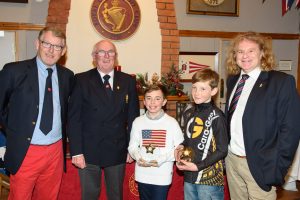 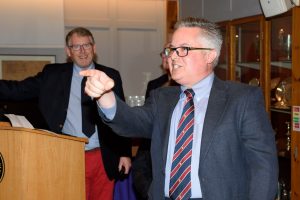 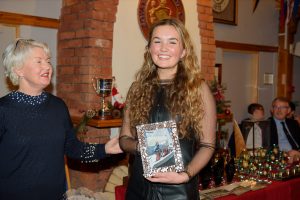 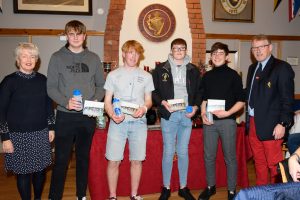 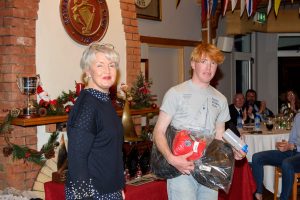 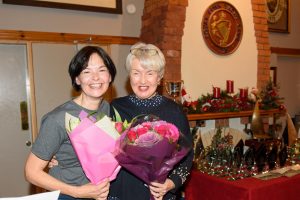 A Junior Dinghy memorial trophy, in the memory of a deceased Junior fleet stalwart, Frank Thompson, was presented this year to worthy recipients Clayton & Barbie Kohl who have done an incredible amount of work building skiff fleets within the club, running both the Laser and 29er fleets for the year. In typical Frank Thompson style, the couple have spent the last number of years towing boats and sailors around the country and further afield – the presentation made by the whole Thompson family (Ailish, Richard, Rachel & Peter) was warmly welcomed by all attendees. 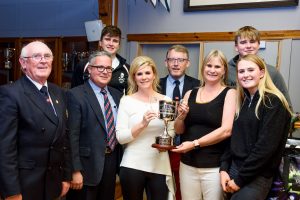 With much anticipation building over evening regarding the awarding of the Pyewacket Trophy. Originally donated by Roy Disney, this magnificent trophy is awarded to the sailor who has achieved the best results during the season both in home waters and particularly abroad. With the success of Royal Cork sailors in 2019 this was always going to be difficult and the sailors under consideration for the award were as follows: James Dwyer-Mathews(Optimist), Cillian Foster(Topper), Michael Crosbie(Laser), Chris Bateman(Mixed Dinghy) and Harry Twomey(29er).

After much deliberation, James Dwyer-Mathews was crowned the 2019 Pyewacket Trophy winner. 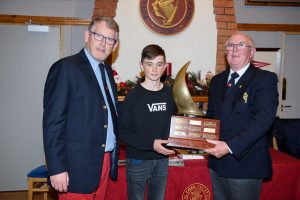 A big Thanks to Bob Bateman for all his photographic help throughout the year both on and off the water!