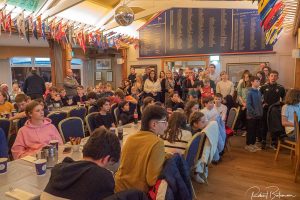 By Maurice Collins on October 25, 2022 in Junior Sailing, Latest

The RCYC Junior Laying Up Supper was held at the club on Saturday 22nd Oct. This was the first chance in 3 years for our junior sailors to celebrate the season together with their parents and the dinghy committee.

Maurice Collins Rear Admiral Dinghies opened proceedings at 7pm, welcoming the admiral and a packed club house with most families represented on the night. Maurice spoke of the action-packed season at the club as well as the many national and international events that the club was very well represented by our sailors. It was a welcome reaction to the 2 seasons where travel and celebrations were restricted due to covid-19.

The class captains & program coordinators then took us through the season highlights for each class/program, with each class presenting a Sailor of the year, and Most improved sailor category.

The Pyewacket trophy donated to the club by Roy Disney to recognise achievement in junior sailing, is presented by the club annually to the junior sailor(s) who best represented the club.  This year the trophy was presented by Admiral Kieran O’Connell to Alana Twomey & Lucia Cullen. They did themselves and the club proud in not only being the first female team & U17 champions at the Irish 29er Nationals but in winning the U17 29er World Championships, they were 3rd female team in the World Championships and 17th Overall in the World Championships. In a new initiative by Stephen O’Shaughnessy & Ulster Bank, a crystal bowl engraved in resemblance to the Pyewacket was also presented as keepsake to the winners. 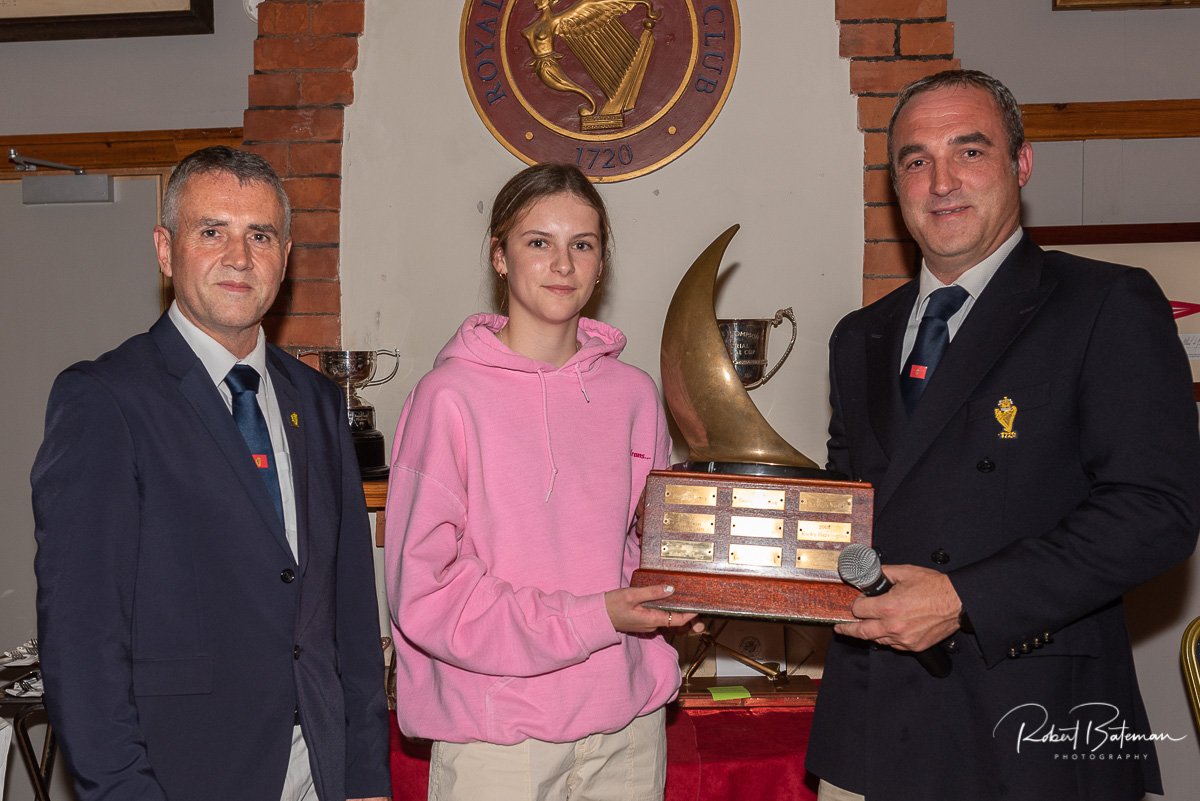 Class Prize Winners were as follows

Optimist Sailor of the year 2022

John & Rachel Corkery were presented with the Frank Thompson Memorial Cup for their outstanding contribution to the club in 2022.

A tremendous amount of work goes into organising the Laying up supper, thanks to Ger Venner along with Sophie Crosbie, Susanne Barry, Tina McCarthy & Irene Hickey for organising the event this year. Thanks to Bob Bateman club photographer who was once again on duty to capture all moments on camera. Thanks to Craig O’Neill for putting together the slideshow1 and slideshow2 rolling in the background for the evening with photos from across the classes all season. Thanks also to Amy, Anne and all the club staff for their hospitality on the night.