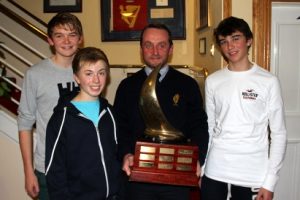 Last Friday a highly successful junior sailing season concluded with the Junior Laying Up and Pyewacket Trophy Award Night .
A large attendance of both sailors and parents from the Laser, Feva, 420 and Optimist classes enjoyed a marvellous evening celebrating the success of young Royal Cork sailors during the 2012 season.

Each of the dinghy  classes in turn presented various prizes to their successful sailors. Fun prizes were also presented to both children and adults. Frank Thompson looked spectacular in his pink all-in-one pyjamas. Various tokens of appreciation were also awarded during the evening for good services rendered in the season.

Rear Admiral Dinghies Darren O’Keeffe congratulated all the sailors and took the opportunity to thank all who provided time, expertise and resources to assist in club events and coaching during the season. A  particular note of thanks was expressed for the class captains and respective committees for their hard work during the season.

The climax of the evening was the award of the Pyewacket Trophy. Originally donated by Roy Disney, this magnificent trophy is awarded to the sailor who has achieved the best results during the season. With the success of Royal Cork sailors in 2012 this was always going to be a difficult, yet much anticipated decision, and the sailors under consideration for the award were as follows:

In the RS Feva fleet young Eoin Lyden had a great season finishing National Champion and, following qualification for the Junior Helmsman’s, finished a fantastic 2nd overall against stiff and much older opposition.

For the 420 fleet Patrick Crosbie and Grattan Roberts had an amazing season. The 420 pair were ISA Youth Nationals winners, 420 Nationals and rankings winners and qualified to represent Ireland in the ISAF Youth Worlds finishing a highly creditable 13th. Patrick also travelled to India and won a Laser 4.7 event while Grattan recovered from an injury that prevented him from sailing.

From among the aforementioned brilliant sailors and achievements,  a winner and runner up had to be chosen. Following much deliberation, the 420 pairing of Patrick Crosbie and Grattan Roberts were awarded the Pyewacket Trophy with Dougie Elmes a close runner up. Congratulation to the boys and to all of the successful sailors in each class.

With that the evening and the 2012 season drew to a close. Hopefully success will come again to Royal Cork sailors in 2013.

Thanks to Anne, Anthony and all the staff on the night for looking after the sailors and parents and helping to make this a great night for all. Thank you to Paul Keal for his photograph.