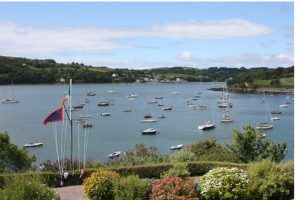 This June Bank Holiday weekend we are hoping to get as many boats to travel down to Glandore as we can, in an combined effort between Glandore Harbour Yacht Club, Kinsale Yacht Club and the Royal Cork Yacht Club in an effort to revive the Glandore Regatta, it has been many years since this regatta has had the south coast fleets invade their fine shores.

Friday 29th May.  Fastnet Race from Kinsale around Fastnet and finishing in Glandore (Sponsored by CH Marine).  See notice of race on KYC website for details.

Saturday 30th May. Crosshaven to Glandore. The race is open to all Cruisers/Sports Boats and White Sail fleets. This race commences: at the Revised First Gun of 0855 hours from weavers point.

Note that there is also a race from Kinsale to Glandore on Saturday.

Sunday 31st May. Race from Glandore to Kinsale first gun 10:55. This race is open to all cruiser and white sail fleets. Marina berths will be offered to competing visiting boats in Kinsale on Sunday. Food will be served in the club house from 1700 hours with prize giving at 18:30.  There will be a time limit cutoff of 1800hrs for this race.

Berthing will be provided on Glandore Harbor Yacht Club’s summer moorings at Union Hall. The club is providing a ferry service to and from the moored boats. There will also be limited mooring at Union Hall Pier available.

Glandore Harbor Yacht Club are organizing a Barbeque on the pier at Glandore at 1700 hours attendee are invited to bring their own preferred drinks. Prize giving for the races into Glandore will take place at 19:00 hours on Glandore pier.

Hope to see you there.