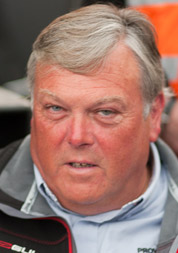 Irish Paralympic sailor John Twomey from Kinsale YC has been appointed President of the International Association for Disabled Sailing (IFDS). John was elected  by his peers attending the International Sailing Federation (ISAF) Annual Conference hosted by the Irish Sailing Association (ISA) in Dun Laoghaire, Co. Dublin from  November 1st to 10th. This prestigious honour comes only months after John competed at his tenth Paralympics, a record for any Irish person competing at either the Olympics or Paralympics.

Upon his nomination John remarked “I am delighted and honoured to have been chosen by my colleagues to take on this role. I promise to work extremely hard to the benefit of the sailors interests“.

John will take over from outgoing President Linda Merkle and will serve a four year term at the helm of the international organisation responsible for sailing for people with disabilities worldwide. Sailing is one of the very few sports in which both able-bodied and disabled people can participate on equal terms so having an Irishman managing the sport globally is a credit to the sport in Ireland. John is a long time Paralympic athlete, a successful businessman and member of the IFDS Executive Committee since November 2005. At a critical period in the growth of IFDS, John’s knowledge and experience will be a great asset to the Association.