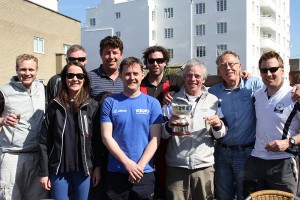 It was great to see Ian Nagle and his crew on Jelly Baby, travelling all the way to the UK to represent the Club at the Vice Admirals Cup and winning in such style. As Rear Admiral Keelboats I would like to offer my congratulations on behalf of us all to Ian and his crew, Its is still only May and already the Club has claimed two major Keelboat titles (both in the UK). The boat will remain in the UK till June for the J Cup before returning to compete in Sovereign Cup in Kinsale, and we wish them the best for all to come. Well done Guys. See the full report below. 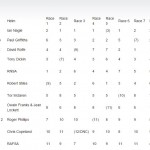 In the J/109s Ian Nagle’s “Jelly Baby” put the final stamp on their already impressive lead by adding a third followed by a win to secure first place overall.  Whilst the victor was a foregone conclusion the same could not be said of the remaining podium positions with just four points separating Robert Stiles’ “Diamond Jem”, Paul Griffiths’ “Jagerbomb”, the RNSA’s “Jolly Jack Tar”, Tony Dickin’s “Jubilee” and David Rolfe’s “Shadowfax” overnight. The tension was palpable as the boats came to the line and it was nip and tuck from start to finish of race eight.  “Shadowfax” took her first race victory of the series and was followed across the line by “Jagerbomb”, “Jelly Baby”, “Jubilee”, “Diamond Jem” and then “Jolly Jack Tar”.  A quick recalculation of the points revealed that “Jagerbomb” now lay second on 23 points, “Shadowfax” and “Jolly Jack Tar” were both on 26 points and “Jubliee” and “Diamond Jem” both had 27 points. Right from the final warning flag the boats were jockeying for position and there was plenty of place changing on every leg of the course.  At the line “Shadowfax” crossed second behind “Jelly Baby”, “Jubilee” was third and “Jagerbomb” fourth. “Jolly Jack Tar” could only manage an eighth, their worst result of the series, and “Diamond Jem” was ninth.  Overall that meant that “Jagerbomb” took second place overall by a single point from “Shadowfax” with “Jubilee” fourth, “Jolly Jack Tar” fifth and “Diamond Jem” sixth.Having travelled all the way from Cork to compete in this year’s Vice Admiral’s Cup regatta “Jelly Baby’s” owner Ian Nagle said he was “Pleasantly surprised.” with their success. “We’ve done pretty well in Ireland, we’ve won a couple of ICRA Nationals in 2012 and 2014 and we won the Irish J/109 Nationals last year, but this is our first time out of Ireland.  We’ve come from Cork and are staying to do the J-Cup as well. We genuinely didn’t know how we would fare against the English boats. There are no J/109s in Cork so we weren’t sure how we were going to do, but I think after race 3 we felt we might be on the pace. We were very happy with the race management.  That kind of fast turn around was great, its lovely to race and start again quickly, that’s what its all about really.  He [Rob] did a great job as there was so little wind on Friday so to get the three races in that day was magic. We were full of praise for him. After that we’re mad for more!”