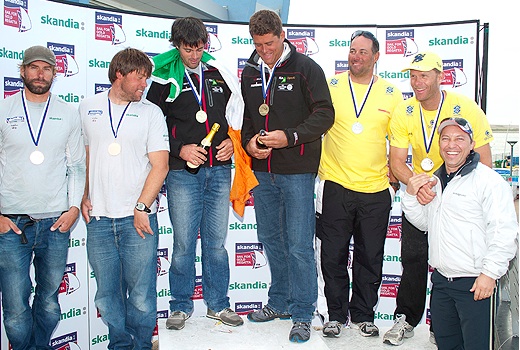 The Picture says it all!. Photo onEdition

After a nail biting race  at almost the end of the racing schedule  for the medal races from Weymouth today, there was absolute joy for the Irish as Peter O’Leary and David Burrows crossed the line in third place in the medal race that counted for double points and secured the Gold Medal for Ireland.   They had remained consistently in the top three placings during the series taking first place in Race four, and with their score today in the medal race counting for double points they clinched the Gold.  This is O’Leary’s second time taking the Gold Medal title at Sail for Gold and is a wonderful confidence booster coming at what is the final dress rehearsal for the Olympic Regatta at the Weymouth venue in August.

Annalise Murphy took the bronze medal in the Laser Radial fleet and Ryan Seaton and Matt McGovern finished 7th in their medal race for the 49er class showing the quality and competitiveness of our entrants for the Olympic Regatta of 2012.

Wonderful and most encouraging results from this regatta and hopefully bearing good omens for the event in August.