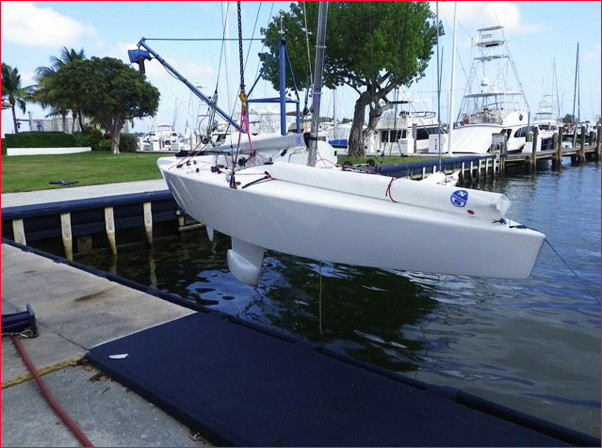 It is that time of year again when the date for Miami Sailing Week is almost upon us and that means all the excitement of the International Star Class Bacardi Cup Competition.  Our Royal Cork Olympic contender Peter O’Leary and His crew David Burrows of Malahide will be flying the flag high in their new boat on view in competition for the first time at this event.   To illustrate the intensity of the competition younger brother Nin O’Leary crewed by Rodney Hagebols, who have been acting as training partners, will also compete at the Bacardi Cup. Nin and his crew will sail Peter’s IRL 8418 DeHaven, and the Olympic contenders will sail the newly built IRL 8473 Slipper 1.

Team O’Leary Burrows are joined on their quest for gold by world class coach, boat builder and ex-Olympic Sailor Marc Pickel, the designer and builder of the team’s new P-Star keelboat, Slipper 1, along with Mark McCabe their physical preparation, training and recovery coach

The BACARDI Cup headlines the week-long regatta in Miami, and, with 65 Star teams registered to date, will continue its tradition of excellent competition.  Among the notable sailors vying for the 85th BACARDI Cup title are 2007 winner Hamish Pepper with crew Jim Turner (New Zealand) and 2008 Olympian Peter O’Leary and David Burrows (Ireland).  Three of the top-seven finishers at the 2011 Star World Championship in Australia will also compete, including 2008 world champions Mateusz Kusznierewicz and Dominik Zycki (Poland) who finished fourth in Perth, as well as Eivind Melleby and Petter Morland Pedersen (Norway) and Xavier Rohart and Pierre-Alexis Ponsot (France) who were sixth and seventh respectively.  Leading the American contenders are 2009 Star World Champion George Szabo (San Diego) who will sail the BACARDI Cup with Miami’s Magnus Liljedahl, who was both world champion and winner of Olympic Gold in 2000.

This will be the Star Class 85th consecutive year partnering with Bacardi, a tradition that began in Cuba, then in Miami since 1962 making  this year the 50th anniversary and the 100th anniversary of the International Star Class and unfortunately will be the last time the Class will compete at the Olympic Regatta.

Racing for the Stars gets underway on Monday, March 5.  Starting on Thursday, March 8, the Stars will be joined on Biscayne Bay by sailors in the Viper 640, Audi Melges 20, and Melges 24 classes, along with the J/80 class which makes its event debut following their successful participation in the 2011 BACARDI Newport Sailing Week.  Racing, for all classes, will conclude on Saturday, March 10.

Vinnie O’Shea moves to a Corby 33 for the coming season
O’Learys by two in action at International Star Class Bacardi Cup at Miami!