Defending All Ireland Sailing Champion Ben Duncan will face some stiff competition next week as he fights to retain his title. 16 national class champions have been invited to compete at the Irish Sailing Association’s most prestigious annual senior sailing event; the ISA All Ireland Sailing Championship on the 6th and 7th of September. The championship, which began in 1947, will be sailed in the ISA’s fleet of J80 keelboats from Howth Yacht Club where the nation’s top sailors will battle it out for the coveted Helmsman’s Trophy.

Among the invited competitors is recent Sailing Captain of the successful Irish Commodore’s Cup winning team and 1720 National Champion Anthony O’Leary – a powerhouse within the international sailing circuit. O’Leary has competed at the All Irelands numerous times. Although both his sons Peter and Nicholas have won the championship a combined five times, Anthony himself has so far failed to bring the title back to Cork.

Earning a nomination from the GP14 class is Olympic veteran Ger Owens who competed at the Games in Athens, Beijing and most recently in London. Owens is no stranger to the ISA championship having won it in 2000. He will also line up against the 2007 victor Stefan Hyde.

The 16 boats will compete in two fleets of eight on Saturday, each scheduled for three races. From there the top three boats from each fleet will progress to Sunday’s final four-race series with two additional places remaining for the top two boats from a two-race repechage on Sunday morning. 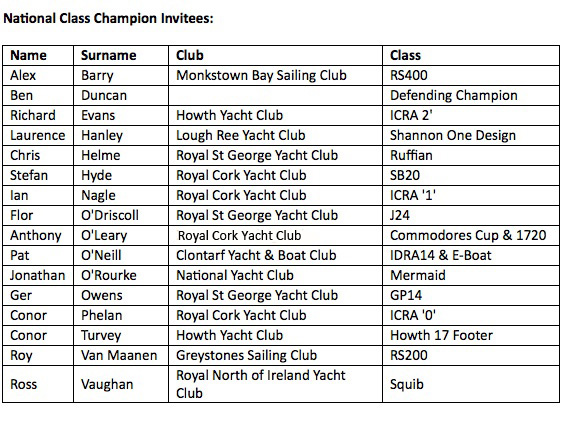